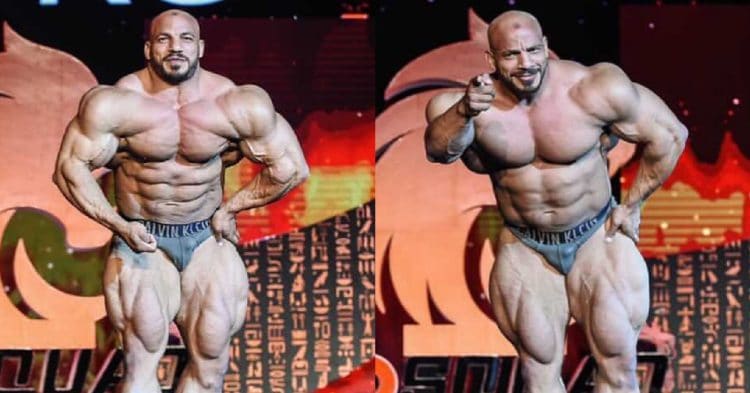 Big Ramy put on an incredible performance to win the 2021 Mr. Olympia, and defend his title. Now, for the first time since that event, the Egyptian appeared on stage for a guest posing at the KO Pro Egypt contest.

It goes without saying, that Ramy is by far the most popular bodybuilder to ever come from Egypt. This is evidenced by the warm welcome he has received after winning both of his Mr Olympia titles, as well as the fact that his hometown decided to name a square after him.

So naturally, when he found out that the IFBB Pro League was having a contest in Egypt, he needed to take part in some way. While he did not compete at the 2021 KO Pro Egypt event, a video posted to Instagram shows that the two-time champion took about a minute and a half to guest pose, entertaining the fans and being showered in cheers from the largely Egyptian crowd.

As always, Big Ramy looks absolutely massive while doing this guest posing. Aside from that however, he also appears to be in pretty solid shape for somebody who just competed and won a few weeks earlier.

Of course, that should come as no surprise when considering the fact that the champ has already begun his prep for the 2022 season. While he has not expressed any plans to compete prior to next year’s Olympia, he did reveal on social media that he was not taking much down time, and was getting right back to work.

“The work for next year starts now!! I will use the next 12 month to get better. I know what we need to do and we are on it,” he wrote.

Considering how impressive Big Ramy looked last year, it is going to be interesting to see what a long prep season will do to help him retain his title again. If he can sure up some of the weak areas that fans and critics pointed out from the 2021 Mr. Olympia, he will likely be unstoppable for the foreseeable future.