Flex Wheeler gives an update on his health as he continues to battle through his COVID-19 diagnosis, while getting well wishes from none other than Dave Bautista 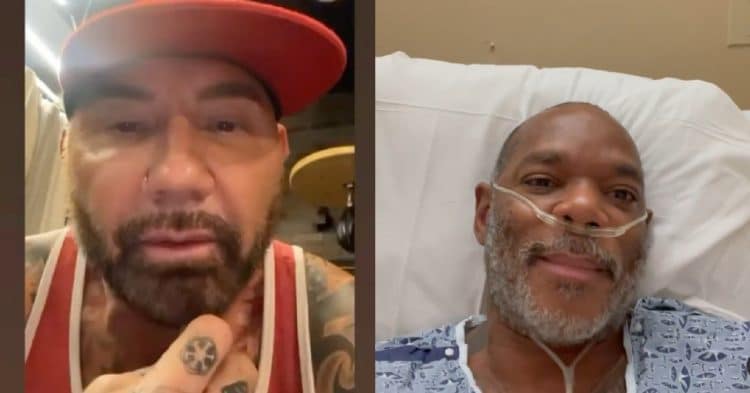 It has been a tough few weeks for bodybuilding legend Flex Wheeler, as he battles through a particularly bad case of COVID-19. However, it seems that he is doing his best to stay positive, while getting well wishes from the likes of Dave Bautista.

The entire bodybuilding community has been behind Wheeler as he works to get through a spat with COVID-19 that has seen him hospitalized for nearly a month. The virus in itself is not the only problem, with it actually leading the already compromised kidneys of Flex to go into acute failure.

That said, he is doing his best to stay positive and keep working through it, making it clear that he has no plans on giving up this fight anytime soon, even with damage showing in his lungs. This mindset has been inspiring enough that it led to him getting a video message from WWE and Hollywood superstar Dave Bautista, who wished him a speedy recovery and let him know that he was not alone in this fight.

“We love you big dog. Just do your thing and get better, like you always do. Just pull through this and keep inspiring people. It’s not your time brother,” Bautista said, tagging Flex Wheeler.

It comes as a surprise to no one, that throughout this entire ordeal, Flex Wheeler has been nothing short of a beacon of positivity. Of course, this is to be expected from someone who has received multiple awards and recognition for his courage and ability to preserve through the many obstacles that he has faced over the years.

This positive mindset was put on display with another Instagram post from Flex himself, in the form of a video inside the hospital room. Here a positive message plays while Flex pans the room, talking about the paths that God has you walk when you ask him for something, while the bodybuilding legend says “one love.”

“Nothing but love ❤️” Wheeler captioned.

It seems that throughout this entire ordeal, Flex Wheeler has made it clear that he is not going to stop fighting. Hopefully things look up for him moving forward, and he can get some sort of recovery.