Impressive lift by the veteran of the strength game 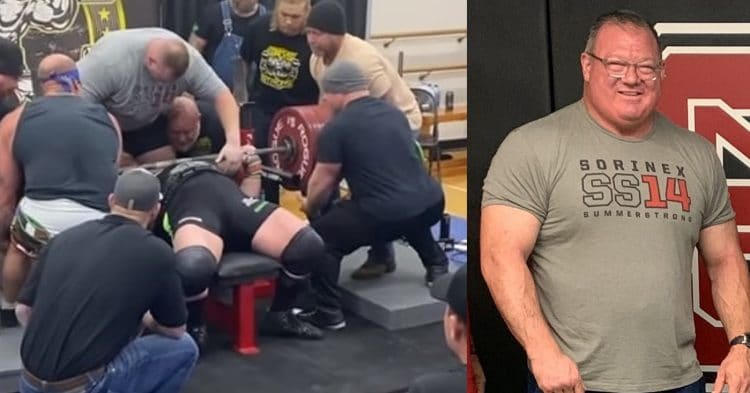 People really like to talk trash about equipped powerlifting because it looks super funny, the range of motion is quite often questionable and there’s always seemingly an endless number of spotters helping the lifter. Be that as it may, equipped powerlifting is still POWERLIFTING. It’s still a strength sport that requires a whole bunch of dedication and talent to be good at. Also, take into consideration that equipped lifers handle weights larger than an average powerlifter can total in a meet. It’s all fun and games until the equipped lifter squats down with the weight of a small car on his back.

This quick introduction brings us to Bill Gillespie and his new equipped bench press world record at mind-numbing 1129 lbs. Bill Gillespie has been competing in powerlifting since 1981, which would mean that he set an all-time world record in his 41st year of competing at the tender age of 62! Now that’s a lot of numbers in one sentence, so let’s get down to the most important one-1129lbs. The All-time world record was recorded on Jan. 22, 2022, at the 365Strong New Year Power Bash in Charlotte, NC, at a bodyweight of 146.4 kilograms (322.8 pounds).

Bill’s bench looked clean and flawless, and that means a lot in the world of equipped lifting. Like I mentioned earlier in the text, equipped lifting is often, very, “iffy” looking in the range of motion department but this looked amazing. Bill Gillespie unracks the weight while “September” from “Earth, Wind&Fire” blasts through the arena and lowers the weight down to the chest with full confidence. The weight stabilizes on his chest and as the judge gives the “press” signal he blasts the weight upwards and that’s a “good lift” and Bill Gillespie just set a world record. Here’s what he had to say about it in his own words.

1129 All Time World Record! Praise God for an incredible 50 year journey and all of the great lessons I have learned about life and my relationship with God. Today is my last competition and on my last attempt I have been blessed with the honor to stand on top of the mountain. I want to thank so many people for their support and help because I know that things like this doesn’t happen on your own. I am done competing now at 62 years old and I’m going to lose weight and use the journey that I have been through to help enrich other peoples lives.

From the wording of his post, it looks like we might have just witnessed history as he has his sights set for a well-deserved retirement at 62 years of age.  By the looks of the smoothness of that bench, he could easily continue breaking world records with ridiculous amounts of weight but it needs to be taken into consideration that he has been lifting for 50 years, of which 40 was dedicated to competing. That is time away from family and friends. Countless hours under the bar pushing through soreness and pain. That much lifting must suck as hell for the body and for the mind. Bill Gillespie earned his retirement and he goes out on top, with one last record to his name.

Bill Gillespie is a former NFL and NCAA strength coach, which suits his powerlifting career. He has also competed in over 80 competitions in his life, mostly doing only the bench press. Bill’s first major win came in the 1997 USPF Bench Press Nationals, where he won the submasters single-ply division, in the 125 kg category. Since then, wins have been accumulating for Bill, including meets, Nationals and World Championships.

Bill has not competed in the squat and deadlift events as much but has set some impressive numbers in his younger days. He competed mainly in the single-ply suit division, except his bench, which is in the unlimited equipment division. Bill’s competition PRs are:

Bill Gillespie broke the world record, which was previously held by Tiny Meeker. Meeker set the world record of 510.2 kg (1125 lbs), at the IPA National Powerlifting Championships in York, Pa. on November 20th, 2021.

Will Barotti is another juggernaut who claimed 501.2-kilogram (1,105-pound) lift in June 2020. However other lifters came in and claim the world record.

Heaviest Bench Presses of All Time