Bodybuilder Blessing Awodibu Shares Brutal Leg Day Workout: ‘I Will Be On My Best This Year’

Men's Open standout Blessing Awodibu is back at it recording another brutal leg day workout session. 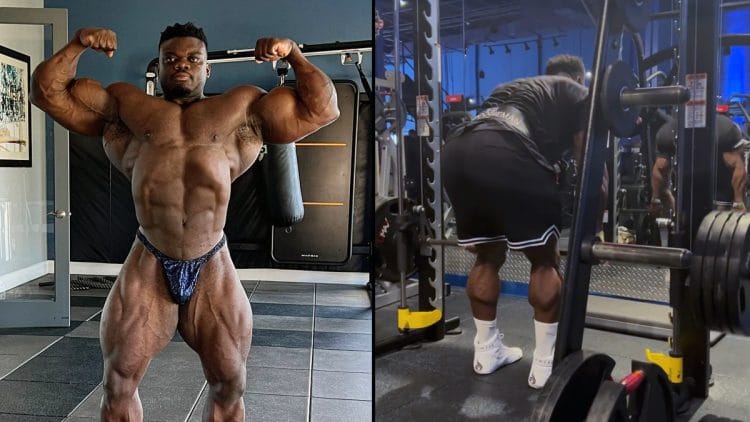 Following an exciting 2021 rookie season in bodybuilding, Blessing Awodibu has been making requisite changes to his prep. With a focus on increasing his level of conditioning at future shows, Blessing published a strenuous leg day workout on his YouTube channel.

Scoring third place at the 2021 Indy Pro in his debut, Blessing showcased impressive size and chest development. Unfortunately, his third-place performance at the Indy wasn’t enough to secure a coveted invitation to the Mr. Olympia show later that year. After coming up short in prejudging, Awodibu vowed to return to his next event (New York Pro) with a refined physique.

Looking to pick up his first major bodybuilding title, Blessing stormed the stage at the 2021 New York Pro with a chip on his shoulder. Despite entering with the best of intentions, the lineup for the east coast show in 2021 was phenomenal. Men’s Open juggernaut Nick Walker delivered on all of the pre-event chatter after nailing first place at the New York Pro.

Blessing found himself in sixth place behind some notable names like, Justin Rodriguez in 2nd place, and Hassan Mostafa, who placed in 3rd respectively. Determined to taste victory this year, Blessing posted a workout ten weeks out from his return to the 2022 Indy Pro.

With the Indy Pro set for May, Blessing has been focusing on improving his legs and conditioning to bring his most complete package to date. The bodybuilder shared his leg day workout video on YouTube.

I feel like my very best is an extremely dangerous look. I feel like it’s totally different from a lot of the people that you guys see now. I’m super excited man. The work goes on.

What we’re doing right now is when we’re getting up to five plates. We are stripping it down to three plates a side because right now my quads are absolutely jammed up. We are going to do 3 sets. The last 3 set of ten, then triplets side with 20 reps solid. This is set number 9.” Blessing Awodibu shared.

While Blessing intended to train hamstrings, a lingering issue kept him from the workout. Instead, he will add it to his training regimen on Friday. Since hamstrings were taken off the table, “The Boogieman” decided to focus on glutes work as a meaningful substitute.

“Today, I was supposed to finish with some hamstrings but my hamstrings are still a bit fucked from Friday. They still sore, they not fully recovered yet so I don’t really think it’s wise enough to train them today.

I’m not going to do hamstrings today. I’m going to push them to Friday. So that’s the end of my quad workout. Now, I’m going to blast a little bit of the glutes and then we’ll call it a day.” Blessing said.

A heated rivalry formed between Blessing and Nick Walker during the lead-up to the 2021 New York Pro. Despite tension existing at first, Nick and Blessing now train together from time to time at the RedCon1 Gym in Florida. Both have gone to considerable lengths to help one another prepare for their upcoming shows.

Awodibu is one of the most promising prospects in the sport following his breakout season last year. With a brutal leg day session in the books, Blessing is eager to take home gold at the same show that saw his explosive Pro debut in 2021.