In addition to Jake Paul's fight offer, the promotion responsible for the boxing match between The Iranian Hulk vs. Martyn Ford has also put in a bid to host the showdown. 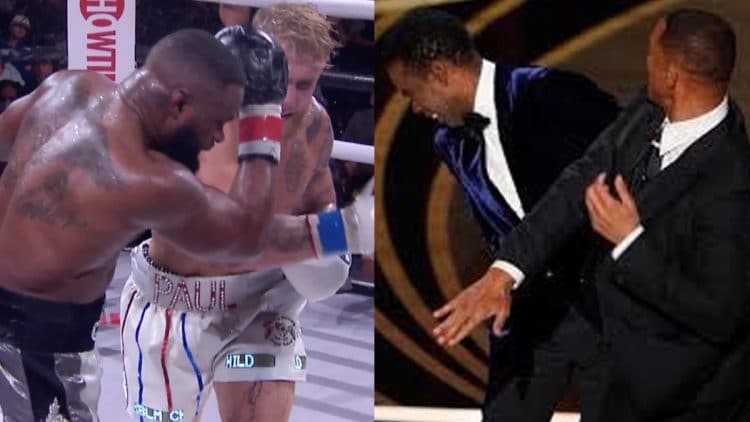 Following the recent quarrel between actor Will Smith and comedian, Chris Rock at the Academy Awards show, Jake Paul tweeted a fight offer out to both men involved. Paul is offering $15 million each to Will Smith and Chris Rock to settle their differences in the boxing ring.

The internet exploded over the weekend following the 94th annual Academy Awards show. Chris Rock made a hair loss joke about Smith’s wife, Jada Pinkett Smith, which prompted the famous actor to approach the stage and slap the comedian. After the slap was heard from around the world, both men have since apologized for their actions. However, Disney star Jake Paul believes the situation should be resolved in the boxing ring instead.

Despite entering the combat sports scene as an online influencer, Jake Paul has steadily made a name for himself in the boxing ring with pre-fight trash talk and the blistering power in his hands. His foray into boxing has been met with controversy.

Nah this is crazy ahah https://t.co/ARYgmj1tpp

In spite of that, Paul cemented his status as a legitimate boxer after dispatching former UFC welterweight champion Tyron Woodley in the sixth round of their contest by knockout. Known for settling his differences in the ring, Paul has now suggested that actor Will Smith and comedian Chris Rock do the same.

Promoters, Including Jake Paul Express Interest in Fight Between Will Smith & Chris Rock

After Smith and Rock dominated the social media landscape on Sunday, actor-turned-boxer Jake Paul wanted to get in on the action and host the potential showdown. “The Problem Child” tweeted a proposition, offering $15 million to both men to settle their beef on his next boxing undercard in August.

Let’s do it in August on my undercard https://t.co/jBYIpHOTk2

“I got $15m for Will Smith and $15m for Chris Rock ready to go Let’s do it in August on my undercard” Jake Paul shared.

Eager to see the two lock horns, Paul poured gasoline on the idea of watching Will Smith and Chris Rock throw hands.

In addition to Paul, Boxstar has also thrown their name in the hat to host the potential fight between Smith and Rock. Boxstar is the organization responsible for promoting the upcoming boxing event between The Iranian Hulk and Martyn Ford. Taking place inside of a packed O2 Arena in London, England, Boxstar offered a considerable amount of money to see the actors fight on their undercard set for April 30.

“Will Smith vs Chris Rock has the potential to bethe biggest fight of the year, if not the century, so what better way to settle their differences than at a packed O2 arena on April 30. Boxstar Managing Director, Darren Lamb said.

“At Boxstar, we specialise in allowing celebrities the opportunity to put on a pair of gloves and squash their beef in the right way, in a boxing ring, and we would be honoured to put on this fight. “With £10m on the table and a 50/50 purse split, we hope they take us up on the offer and give the fans what they want.”

With non-traditional boxers flooding the sport nowadays, the fight between Chris Rock and Will Smith would be an ideal addition to the Boxstar event. While Jake Paul started the bidding wars, a fight between Smith and Rock would complement the undercard between Iranian Hulk and Martyn Ford set for late April.

Bodybuilder Blessing Awodibu Shares Brutal Leg Day Workout: ‘I Will Be On My Best This Year’