"The Boogeyman" is ready to earn his Olympia invite and showed some of the gains he's made in training during prep for the 2022 Indy Pro. 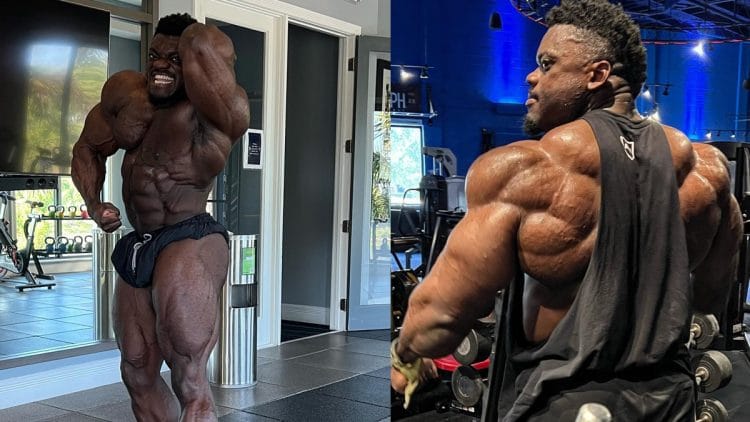 Despite it being early in his bodybuilding career, Blessing Awodibu has shown with the right preparation he’s extremely hard to stand against on stage. In a recent Instagram post, Blessing shared a physique update nine days from the 2022 Indy Pro looking absolutely peeled.

2021 served as Blessing’s breakout year as a popular bodybuilder. He earned third place in his IFBB Pro debut in Men’s Open bodybuilding at the 2021 Indy Pro. Mohammed El Emam took second place and Justin Rodriguez won the show. After emerging as an athlete to look out for, Blessing took his impressive physique to the New York Pro that same year where he placed sixth. The 2021 New York Pro was won by Nick Walker, and after failing to capture the title, Blessing decided to take some time away from competing to address some of the weaknesses that judges observed from his past showings.

In order to improve his build for future shows, Blessing aligned with 2021 Arnold Classic champion Nick Walker. After Nick moved to Florida, Awodibu and Nick have continued to train with each other. Many believe one of Blessing’s weaknesses was his lower body, so he’s worked alongside “The Mutant” to bring up his legs. Growing from his rookie season in bodybuilding, Blessing intends to bring his best package yet to the 2022 Indy Pro.

Fortunately, Blessing has kept his fans up to date on his growth as a top competitor. At the end of March, Awodibu shared some of the progress during a brutal leg day workout. Compared to his physique a few months ago, it’s evident that Blessing has gone to great lengths to bring up his overall conditioning.

During his break from bodybuilding at the end of last year, Blessing focused on cultivating mass and revealed he was weighing around 300-lbs. Blessing has yet to earn his invitation to 2022 Mr. Olympia but will have an ideal opportunity to fix that in just over one week’s time.

Having already found success at a young age, Blessing is currently one of the most exciting prospects in the Men’s Open landscape. After revealing his shredded physique nine days from the Indy Pro, Awodibu is planning to leave the stage with his invitation to 2022 Mr. Olympia.