Martins Licis' training for this year's WSM contest is going extremely well, as he pulled 365 kilograms (805 pounds) for five reps! 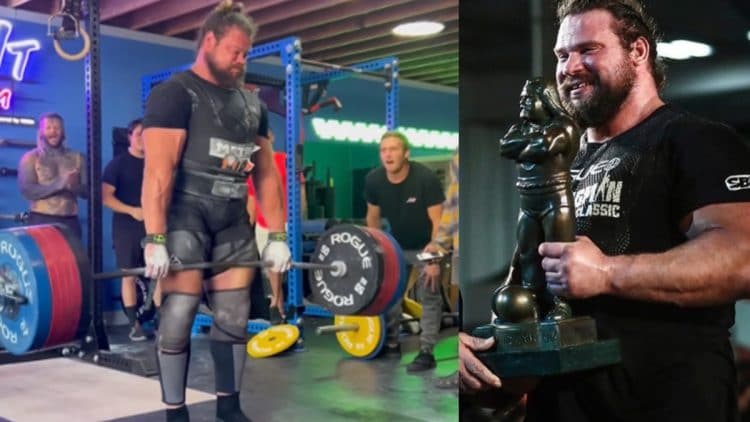 After a series of unfortunate injuries forced Martins Licis to miss out on the greatest Strongman competition for the past few years, it seems like he is now back to his best. Having recovered well, Martins is giving it his all to win the most prestigious Strongman title for the second time in his career. The 2022 World’s Strongest Man will take place from May 24-29, in Sacramento, CA. Martins has turned to simulate the events for this contest in training, as he deadlifted 365 kilograms (805 pounds) for five repetitions.

The events for the 2022 WSM have already been revealed, and the Deadlift Ladder will be one of the events on the first day. At this competition, the organizers will place five progressively heavier barbells in front of the athlete, who will have to lift one and then walk over to the next one. As it would be hard for him to place as many heavily loaded barbells in the gym, Martins is using only one. He is walking back a few steps after each repetition in order to simulate the movement which will be used in the deadlift ladder. Martins used a deadlift suit, lifting belt, and knee sleeves to aid him in the lift. He also wore lifting straps, but didn’t utilize them. His style of deadlifting was with a conventional stance and a hook grip.

“Just wanted three, but didn’t get the lockout I wanted on the second rep, got mad, kept going to make up for it.”

“One more deadlift session remaining to lock this in before World’s Strongest Man.”

Martins Licis wrote that he deadlifted “805lb 366kg”, but those two don’t correlate with each other. It is evident in the video that he pulled 365 kilograms (805 pounds), so he probably just rounded up the kilograms.

It is also his penultimate deadlift session before the 2022 WSM, and even though a lot of athletes have not shared any lifts of this type, Martins Licis is now looking like one of the heavy favorites for this event.

The 32-year-old has found a lot of success in the sport despite still being relatively young for Strongman. Martins Licis has taken part in 21 international competitions, and won eight of them. Most notably, Martins Licis competed in four World’s Strongest Man contests and stood atop the podium once.

Martins Licis is following a completely new principle of training then before his injuries. He is now focusing on his warm-ups, agility, and overall fitness. As a result of that, Martins did not drop any unnecessary points at the 2022 Arnold Strongman Classic and won $80,000. He will aim to have another consistent performance at the 2022 World’s Strongest Man, and thus defeat the rest of the roster.