Champ Brandon Curry, and legend Dexter Jackson send their positive messages to Roelly Winklaar, following the news that he would not be competing at the Olympia this year 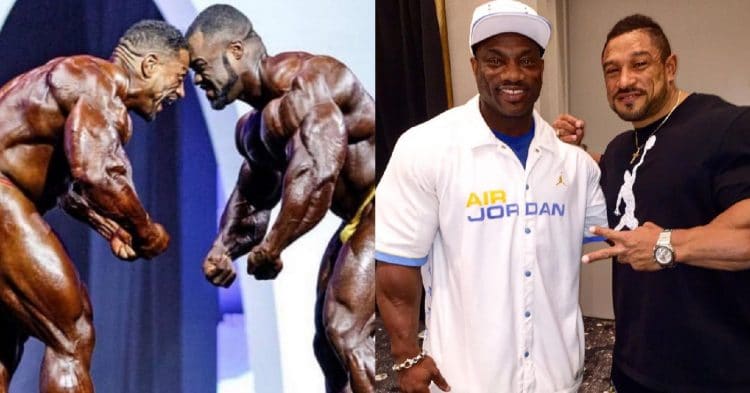 With the 2020 Mr. Olympia set to go down this weekend, fans were disappointed to hear that Roelly Winklaar would not be competing. Now Mr. Olympia himself, Brandon Curry, as well as the legendary veteran Dexter Jackson, react to this news and send their thoughts to their fellow brother in iron.

Winklaar was supposed to be standing alongside Curry, Jackson, and the other big name elite bodybuilders taking part in the 2020 Mr. Olympia. He had been looking solid in his prep, and appeared to be a legitimate threat to the crown, at least on some level. However only a few days before the contest, it was revealed that he had tested positive for the coronavirus, and would no longer be able to compete.

This announcement was very disappointing for Winklaar, but it also bummed out some of the other competitors who were expecting to share the stage with him. Current Olympia champ Brandon Curry took to his Instagram to express how disappointed he was to hear that Roelly had withdrawn. Moreover he wished his fellow bodybuilder a speedy recovery while dealing with the problems associated with having COVID-19.

“Gonna miss you on stage brotha! God speed and I wish you a full and speedy recovery. Bodybuilding fans around the world are praying for you! If they all only knew how much you put into this prep like I do as I got to watch you each and every day in Kuwait bro! 🙏🏿 Know that you’ll be sorely missed up there!”

Curry was not the only one to be disappointed by Roelly’s inability to compete at the Olympia. Longtime bodybuilding veteran Dexter Jackson, who is retiring after this year’s Olympia, was also saddened by the news. He and Winklaar are fairly good friends, and he says that he will be missing Roelly on stage when he competes for the last time.

“It’s going to be a sad day come Friday because as you’ve probably heard one of my best friends in this sport will not be on stage with us this weekend for the @mrolympiallc due to covid. I’m wishing you a speedy recovery nephew and may God bless you. I know it sucks that you won’t be here for my last competition but I will see you plenty. I maybe retiring but you’ll still see me just as much if not more because I will be heavenly involved in the sport. I love you nephew @roellywinklaar go drown yourself in your favored post cheat. ICE CREAM!!! 😂😂”

Hadi Choopan also decided to send some positive vibes to Winklaar after this news broke. He empathized with Roelly and the struggles of being able to compete. At the time, Hadi had not gotten his U.S. Visa, but he said that he understood where Roelly was coming from, and was disappointed that he could not see Roelly’s package on stage.

“Very sad news and dark day for me brother Roelly.

No one else can feel your pain as much as I do. We are almost in the same situation but for different reasons except I can still fight for my chance. I know you brought and prepared totally different package but…

It is heartwarming to see Brandon Curry, Dexter Jackson, and Hadi Choopan reach out to Roelly Winklaar during this disappointing time. Although these guys fight tooth and nail to beat each other on stage, they still share a comradery and look forward to seeing these familiar faces. That being said, there’s still a lot to like about everyone who will be competing this weekend, as we  crown the best bodybuilder in the world.