Just a few days before the start of the 2020 Mr. Olympia, Roelly Winklaar announces that a positive COVID-19 test has forced him out of the event 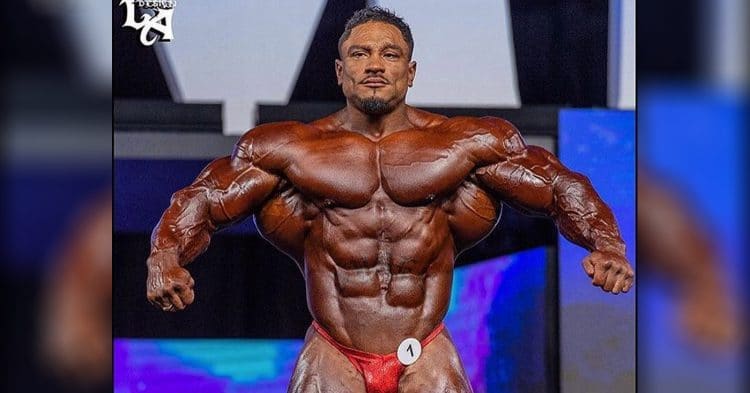 Ahead of the 2020 Mr. Olympia, Roelly Winklaar had been looking ready to contend for the throne. Unfortunately he will not be able to compete, after testing positive for the coronavirus.

The 2018 People’s Champ had been looking intensely focused in his preparation for this year’s Olympia. Winklaar had been uploading all kinds of crazy physique updates over the last few weeks, and it had people wondering if he could potentially go toe to toe with the likes of Brandon Curry and Phil Heath. He had been showing a super conditioned package, having made some serious improvements, and looking ready to put it all together on the big stage.

However in a disappointing turn of events, Roelly Winklaar will no longer be able to compete at the 2020 Mr. Olympia. According to his Instagram, and reports from his team, he has tested positive for the novel coronavirus. Apparently he was en route to the United States from Turkey when he caught the virus. This has lead to him being forced to withdraw, just a few days before the start of the competition.

“It is with an extremely sad and heavy heart that I want to officially announce to all my fans, my supporters, and everyone else in the industry, that I will unfortunately not be competing at the 2020 Mr. Olympia 😔” Winklaar wrote.
.
“I have tested positive for Covid-19 while in Turkey en route to the US. We have tried everything we possibly could but being Covid-19 positive there is really nothing else we can do. In the meantime some Covid-19 symptoms have presented and my focus is now on a full recovery. Even though the news already broke it is only fair that I inform you all personally of this unexpected turn of events 🙏🏼
.
My coach @ahmd_askr and I were so eager to show you an entirely different physique this year. Something you’ve never seen before. Nevertheless, rest assured that while I am in recovery we will be working on our game plan for 2021 👊🏾
.
Thank you to the entire @mrolympiallc and @ifbb_pro_league team who were ready to help us every step of the way. And to my sponsors and everyone else for their support ❤️
.
See you all in 2021 guys! Peace out✌🏽”

This is a super unfortunate situation, and it sucks that Winklaar will not be able to compete at thee Olympia. He had snuck up on fans to a certain extent, but he really made an impression in the lead-up to the contest. It is disappointing that we will not be able to see him tested, and figure out how high he would have scored.

Winklaar is being added to the growing list of athletes who will not be competing. Rafael Brandao also tested positive for the virus and had lingering troubles, forcing him out of the event as well. It is not just the virus either, as Cedric McMillan and Flex Lewis had injuries forcing them out. Then you have the likes of Nathan De Asha, who was unable to get into the U.S. due to travel restrictions in the United Kingdom. There have been several setbacks in the last few weeks ahead of the contest.

Another rookie James Hollingshead withdrew from 2020 Olympia cited no specific reason but said he wants to focus on the 2021 contest.

As much of a disappointment it is that Roelly Winklaar and these others are out of the 2020 Mr. Olympia, there are still a lot of other big names who will be competing, that are going to be exciting to see. Hopefully he has no long term lingering effects, and he can get back to action soon.