After some doubt and uncertainty of the status of his U.S. Visa, Hadi Choopan has arrived in the country just in time for the 2020 Mr. Olympia 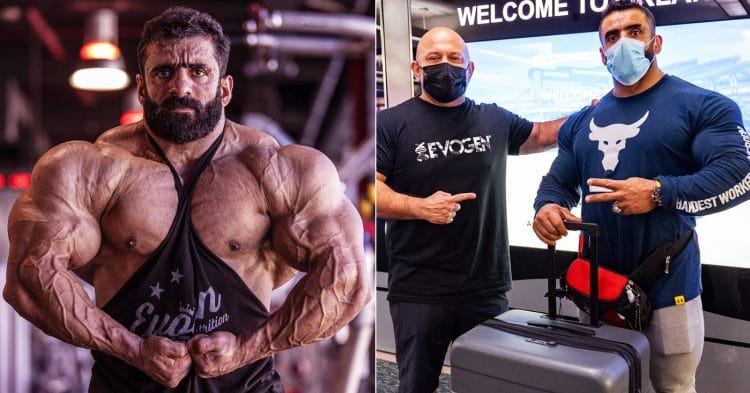 Early this week reports emerged that it seemed that Iranian bodybuilder Hadi Choopan had gotten his Visa to compete in the U.S. for the 2020 Mr. Olympia. Now that has been confirmed, as he has touched down in the country just in time for the competition.

Without a doubt, the biggest struggle that Choopan has faced in his bodybuilding career is not with his on stage performances. Instead it is troubles with him getting in the United States to compete in the biggest contests in the world. He was finally able to make his debut in the country last year, as he scored third in the 2019 Olympia. So fans were hopeful that the same would happen this year, and we could see him on the Olympia stage again.

After it seemed uncertain, and with the Olympia mere days away, Hadi Choopan has finally made it to the country. After reports yesterday that he had been granted his Visa, is has been confirmed that he is in the United States. This was confirmed with an Instagram post from his coach Hany Rambod, who shared a picture of the two, fresh off an airplane in the United States.

“The arrival! They say it couldn’t be done…
@hadi_choopan Rambod said alongside his picture with Choopan.

Special thank you to @hadiparsafar and @parsafar_mahdi couldn’t have done it without you!”

This is obviously massive for fans of Choopan, and for Hadi himself. He is arguably one of the most gifted bodybuilders on the stage today, and he will really have the chance to prove it this year, against the likes of Brandon Curry and Phil Heath.

Things were certainly close, especially as the days ticked away, but he managed to get it done and get into the country in time to compete.

There are still questions as to if Hadi Choopan will be able to pass whatever COVID-19 testing protocols are in place. That has been the downfall of some other athletes who were hoping to take the stage this weekend. However, if he can get by these with no problems, and make it on stage, then he has shown himself to be in great shape to compete with the best of the best.

Build Strength and Size With The 15 Best Deadlift Variations