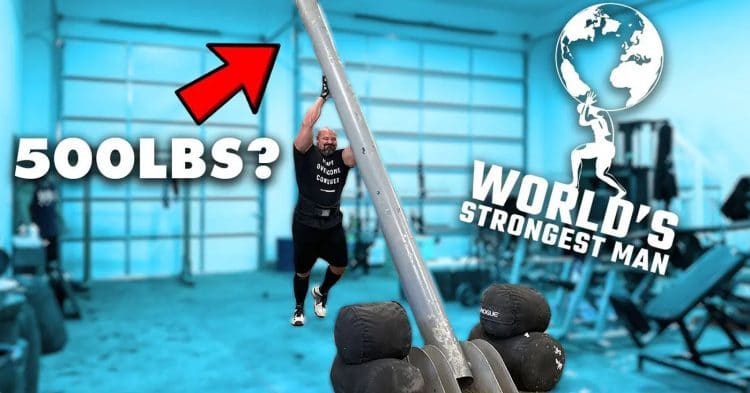 We are reaching the final 50 days before the most prestigious Strongman event of the year, The World’s Strongest Man.  At this moment we know pretty much everything that is to be known about the event. We got the “when“, the “where”, and the “who” but what we don’t know is the “what” as the event list is still kept under wraps.

However, speculations are aplenty, and the latest one comes from the 4x WSM winner, Brian Shaw. Brian has heard it through the grapevine that a certain old-school Strongman classic is making its way back to WSM after laying low for a few years, the Fingal’s Fingers.  What are the Fingal’s Fingers, where do they get their name from and when was the first time they were used in Strongman- all questions I will be answering starting now.

Fingal’s Fingers is essentially a pole “lift&flip” event, and Strongman competitors do just that. They pick up a giant-ass iron pole until it is standing upwards and then flip it over.  Usually, the event has several poles in a row with each one being bigger and heavier than the last one and the guy with the best time wins the event. It’s way more difficult than I explained it, but for simplicity’s sake, we’ll leave it at “pole lift ‘n’ flip”.  Bellow you can see Eddie Hall smoking the first four “fingers” and then getting stuck underneath the fifth one as the weight just kept crushing him.

The event takes the name from Fingal, a hunter-warrior from Gaelic mythology. Fingal is a character in an epic poem written in the 1700s by a poet named James Macpherson from Scottland. While the Fingal’s fingers are based on the mythical hero Fingal from a poem, Fingal himself is based on a real historic person, an Irish hero by the name of Fionn Mac Cumhaill.  Fionn supposedly fought both the Norse Invaders and the Romans in a battle in the North West of Scotland. Sounds badass, I know.

The first time the event was ever used was at WSM 2000. The setup was a bit different than the setup you see when used in later years. The main difference is the pole layout. The poles( “fingers”) were lined up next to each other as opposed to being in a straight line. Putting the poles in a straight line added the element of momentum, speed, and fluidity to the event. The time limit was originally 75 seconds but that got reduced to 60 seconds. The number of poles remained the same at 5.

Now back to Brian Shaw, Brian has historically been very good at Fingal’s Fingers events. He is very tall and lengthy which allows him to dig deep underneath the pole and shift weight very fast not allowing himself to get crushed by the weight of the poles. He claimes he heard rumors of this event returning this year at the WSM,  which was the perfect excuse for him to bring out some new toys to one of his several home gyms. This time it was a Fingal finger which required some logistical maneuvering since the implementation is super long and very heavy.  However, luckily for Brian Shaw, he has an endless amount of optimism and positive energy which is perfect when trying to practice Fingal’s fingers in a closed environment and not destroy anything.

Training When Sick. Should You Hit the Gym or the Sack?