After an intense back and forth battle, Brian Shaw would break his own Keg Toss world record at the 2021 World's Strongest Man 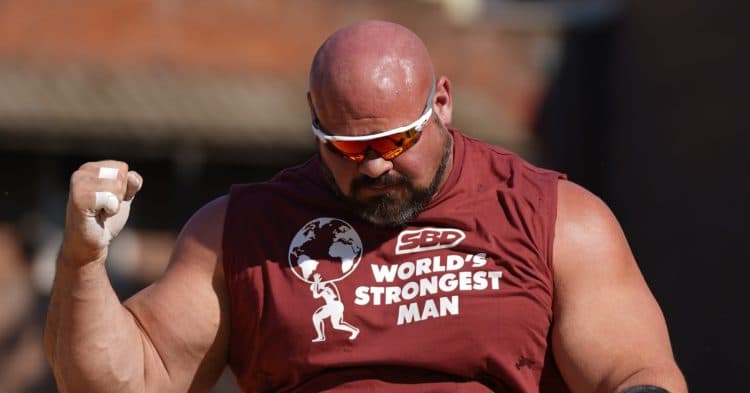 The 2021 World’s Strongest Man, slated from June 15th-20th in Sacramento, California, continued with the first day of Finals on Saturday. In the last event of the day, Brian Shaw scored a new Keg Toss world record.

The first day of the WSM Finals was made up of three events, and we knew they would be exciting to watch. Among these was a Giants Medley, as well as the first ever Titan’s Turntable, where athletes had to push a train.

However it was the third event of the day, the REIGN Keg Toss that had all the attention, as a new world record was expected. Brian Shaw held the Keg Toss world record at 7.25 meters heading into the contest, and had promised to break it again this year.

However he had others looking to stand in his way, most notably Tom Stoltman who had been crushing the contest all day, and also assured fans that he was getting the new record. These two were not the only ones who broke the record though, in what ended up being a wild battle of attrition between four strongmen.

The REIGN Keg Toss event consisted of a 15kg keg being tossed over bars that are set at increasing height. Athletes make the rounds throwing the kegs, until they are unable to surpass the bar within the 30-second window.

The majority of the competition fell out before the bar was set past 6.75 meters. At this point, Tom Stoltman, Brian Shaw, Konstantine Janashia, and Maxime Boudreault were all that remained.

Konstantine was the first to break the record, coming in at 7.26 meters. This only lasted until Maxime capped out at 7.5 meters, which left the door open for more intense action.

With Shaw and Stoltman the only two remaining, fans were losing their minds to see who would beat who. In the end, Brian would max out at 7.75 meters, surpassing his previously held record by half a meter, and beating Tom, who also maxed out at 7.5 meters.

This was an incredible battle between these athletes, and was truly and exciting display of action. In the end though, Brian Shaw delivered on his promise, and scored the event win and new world record.

With this victory, Shaw ends the first day of Finals in the second place position. Despite the strong showing, he is still 5.5 points behind Tom Stoltman heading into the last day of competition.

Stay tuned to Fitness Volt for continued coverage of the 2021 World’s Strongest Man.