Brothers Brandon Myles White and Hudson White gave a history lesson after teaming up to attack a variety of bodybuilding workouts created almost a century ago. 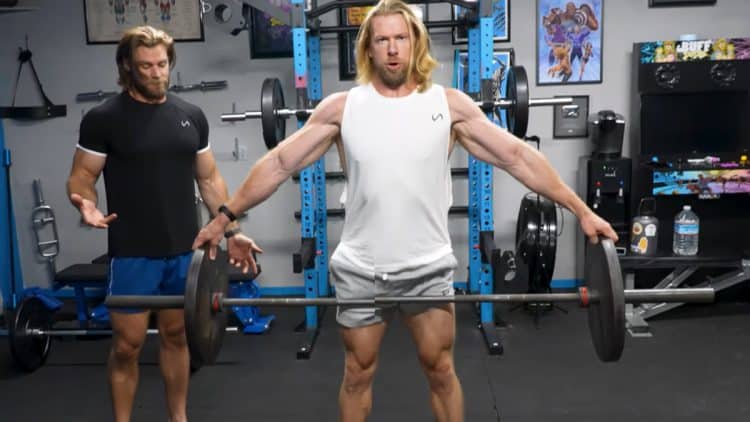 The Buff Dudes, real names, Brandon Myles White and Hudson White are brothers recognized for their entertaining and informative fitness content. In a recent video, Brandon and Hudson practiced an array of unorthodox bodybuilding workouts from the 1900s.

The Buff Dudes are fitness influencers who routinely take on intense challenges to feature on their growing YouTube channel of over 2.5 million subscribers. From training sessions to intense dieting, Brandon and Hudson never shy away from a challenge.

Back in July, the duo tried their luck with what they called “deathbells,” oddly shaped dumbbells covered in spikes that were created by a professional blacksmith. While the piece of equipment lacked practical application, it was interesting to see Brandon and Hudson train with what they deemed as the “World’s Most Dangerous Dumbbell.”

For their next call to action, the Buff Dudes were challenged to undergo a physique transformation by running for 30 days straight to prepare for a 10k run. Following the month, Brandon and Hudson revealed they each lost a single pound but maintained their overall muscle mass. Switching gears, the Buff Dudes decided to try some old school bodybuilding techniques to see if they still have practical use today.

Find a full list of the exercises used below.

Molding a Mighty Back

The Buff Dudes try out molding a mighty back, an exercise that was created in 1938. Brandon and Hudson practiced this exercise carefully because of the strain it put on their backs.

“This one comes from 1938 — a mighty back. It sounds cool, Brandon said. “It says ‘take up your position, with the bells placed between your feet. With a mighty heave, tear the weights off the floor and hurl them to arm’s length overhead in a crucifix position. Do not bend the arms and throw your head back as vigorously as possible.”

After straining their backs, Hudson advised his fans and followers not to practice this exercise.

“That is one of the worst exercises that could possibly ever be done. Never do this exercise. It’s horrible. It doesn’t do anything for you. It’s very dangerous. I was only using 10 pounds. It felt bad just doing my own body weight.”

The Buff Dudes said the next exercise (Barbell wrist twists) comes from the “Herk U Lees Bodybuilding System,” book which was displayed in ads starting in the 1970s.

“This one — in particular, is a little odd. We got it set up right here,” says Brandon.

Hudson stressed the importance of stability given that the barbell is being held by straps. While Hudson fired off some reps, Brandon shared some details about the exercise.

“The straps are wrapped around a barbell, and you’re using that, way you can provide supination, with the curl — which is actually a really good thing. It’s a little confusing. I don’t know why you wouldn’t just use dumbbells.”

“You’re basically using a barbell as one big dumbbell,” Hudson explained. “You want to make sure you grab it in the center to make sure it’s as stable as possible but it’s still going to feel really unstable, as you can tell.”

Out of all the unorthodox exercises thus far, Brandon praised the javelin press the most for its shoulder activation.

The Buff Dudes moved on with Steve Reeves deadlifts. The late Reeves is an American bodybuilder/actor well known for his portrayal of Hercules twice in feature films, which were released in 1958 and 1959.

“Big fan of his, he had an amazing physique — he developed his own particular deadlift,” says Brandon. “Very similar set up to a deadlift but now instead of using a bar, you use the plates.”

Branon appreciated how this exercise tested their strength, especially in terms of grip strength.

For their next exercise, Buff Dudes practiced another dumbbell variation called monkey rows, which have also been referred to as armpit rows.

“With the monkey rows as well, you’re going to have to have a lot of mobility there in the shoulder joint,” Hudson shared.

During the movement, Brandon suggested to “internally rotate the arms,” because a lot of people have trouble with upright rows.

“You’re still utilizing that upright row motion, which is actually really amazing. I’m really surprised. I’ve never heard of this exercise or done it, but it’s definitely one I’m going to continue to do for sure.”

The next exercise was created in the 1940s by Sigmund Klein, in his book “Super Physique Bodybuilding Barbell Course.”

“It’s not uncomfortable. There is definitely the shoulder involvement for sure — because you’re having to hold that barbell in that position. So, there’s really no chest work, but definitely shoulders,” says Brandon.

For the final exercise, the Buff Dudes tried out a workout published in the “Text-Book of Weight-Lifting” by Arthur Saxon in 1905 called kettlebell extensions.

“A very old exercise and one that is kind of still in use today, at least, a similar exercise, with the single dumbbell triceps extensions. This is very similar,” Brandon shared. “Your upper arm is in a nice vertical position, and you are just extending in the triceps to lift the kettlebell above, and bring it back down, just like so.”

Brandon preferred this exercise because placing the kettlebell on the shoulder forces good form and positioning in the arm.

In addition to training methods, the Buff Dudes aren’t opposed to trying out different diets. Based on bodybuilding veteran Kai Greene‘s diet, Brandon and Hudson went vegan for 30 days. They reported on their experiences trying a plant-based diet consisting mostly of fruits and veggies, rice, and beans. By the end of the experience, they were happy with the results.

While the exercises shown in their latest video appear unorthodox, Brandon and Hudson kept an open mind throughout the training session. Following the fitness history lesson, The Buff Dudes were left impressed by many of the old school techniques used to build muscle.