Andrew Jacked is still planning to compete at the Arnold Classic UK show before taking his talents to the upcoming Olympia contest in December. 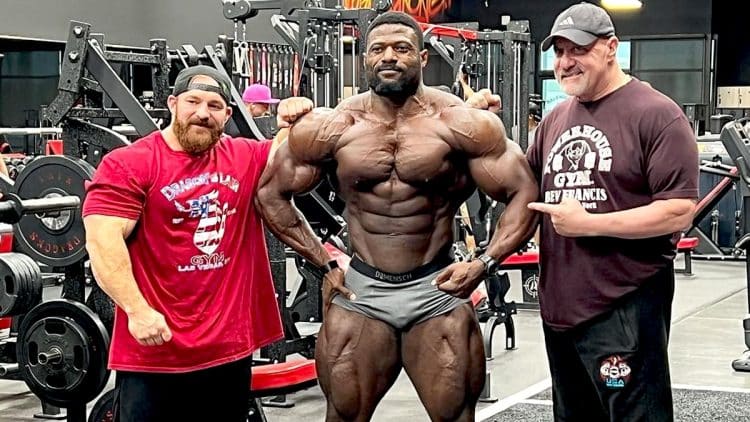 One of bodybuilding’s hottest rookies this year, Andrew Jacked, will have a lot to prove when he takes on the Open class at 2022 Mr. Olympia. In a recent video from Desktop Bodybuilding, Jacked discussed his Olympia ambitions and confirmed his plan is still to compete at the Arnold Classic UK despite having Visa issues.

Earlier this year, Andrew Jacked secured his Pro card after nabbing the Overall Bodybuilding Amateur title at the 2022 Arnold Amateur contest. In preparation for the event, he trained and posed alongside four-time Arnold Classic winner Flex Wheeler. His schedule didn’t change much from March, as the two once again teamed up to refine Andrew’s posing techniques for the 2022 Texas Pro, which took place a few weeks ago.

During the contest, Andrew was pushed on stage by fellow Open class competitor Martin Fitzwater. In the end, the sheer size and quality of Andrew’s package guided him to victory. As a result, he earned an invitation to compete at bodybuilding’s most prestigious event of the year, Mr. Olympia.

As of this writing, Andrew is still planning to compete at the Arnold Classic UK contest. Following his last competition, he vowed to make improvements to his physique. The community has taken notice of Andrew. Bodybuilding legend Jay Cutler believes Jacked’s back is comparable to reigning Mr. Olympia Big Ramy’s.

Another veteran of the sport, Samir Bannout, said Jacked would make the first call-out and place in the top four, assuming he competes at Olympia later this year. Now, take a look at what Andrew had to say about his season thus far.

In a recent interview with Desktop Bodybuilding, Jacked discussed whether Visa issues will prevent him from competing at the 2022 Arnold Classic UK.

“Yeah. Yeah. The plan stays the same because for me, I’m using all these [shows] like to build, boost and build my endurance and confidence more because I still have to make some more people, especially in the Olympia. In the Olympia, I’ll be meeting the real big boys. At the Arnold [UK], most pros have already been to the Olympia for like two or three years — for me, it’s like a learning process,” Andrew Jacked said.

“I think yesterday, I went to the embassy to fix up my visa stuff and everything. I sent the documents to the organizers [of Arnold UK], so, we’ll see what happens. They are trying to fast track or expedite. So, whatever happens, if I have to go, I will go, if I don’t have to go, I can do anything because for me — all my life, I’ve lived by fate,” says Andrew.

According to Jacked, he’s a man of faith, and won’t concern himself too much if he’s unable to compete next month.

“If God says something is meant for me, it will come. If he says it’s not mine, I’ll just chill and something bigger will come after that. I just take things the way it is,” Andrew added. “We’ll do the work, and let God handle the rest, and that’s it.”

When asked directly if there is a rivalry brewing between himself and Martin Fitzwater, Andrew had the following to say:

“If you remember, lots of people, my DMs were flooded with what the Bro Chat, Iain, whatever he was saying, Ben Chow or whatever. But I never paid attention to anything because that’s not me. I’ve got bigger things to think about. Everyone is entitled to their own opinion.”

In Andrew’s opinion, guys with more experience on stage have learned what he refers to as ‘cheat codes.’ He added that when a competitor steps back in the lineup, he learned that he has to as well, otherwise he could get ‘out-angled’ on stage.

“Truly, they have so many cheat codes. Even backstage, one of the competitors walked up to me and told me, ‘hey man, when you’re posing and you see people like stepping back from the lineup, you also have to step back of the line, because they will out-angle you. That’s their cheat code, they are trying to out-angle you.”

He admits he bumped elbows with Fitzwater, but there was no animosity or any sort of rivalry.

“Yeah, we bumped elbows. You know, as you’re flexing and all that, it seems like they’re trying to push the person out but it wasn’t, I was just flexing,” says Jacked. “If we truly had a squabble or beef, which we don’t but one: I’m taller. I’m stronger. So, in terms of strength, or even they put us like — I’m an MMA guy too,” Andrew laughed.

While Andrew didn’t want to outright predict his placing at 2022 Olympia, he said his plan is to earn a ‘good’ position. If he is able to bring up his lagging body parts, Andrew believes anything can happen at the show.

Given that so many variables affect competitors on show-day, Jacked stressed that anything can happen, even after prejudging.

Following his Texas Pro victory, Andrew has remained busy, training alongside his close friend, powerlifter Larry Wheels. They recently linked up for a brutal shoulder and biceps workout. In the past, Jacked has mentioned that Wheels has had a massive influence on his blossoming career.

Despite the Visa issues, Andrew Jacked appears at ease with his bodybuilding season. His plan is to compete at the 2022 Arnold Classic UK before attempting his first Olympia contest in December.

Best Lower Lat Exercises for a Thick Back