Coach Chris Aceto ‘Not Surprised’ By Shawn Rhoden Death: ‘The Entire Industry Turned Its Back’

Shawn Rhoden's coach, Chris Aceto gives his thoughts on the passing of the Olympia champ 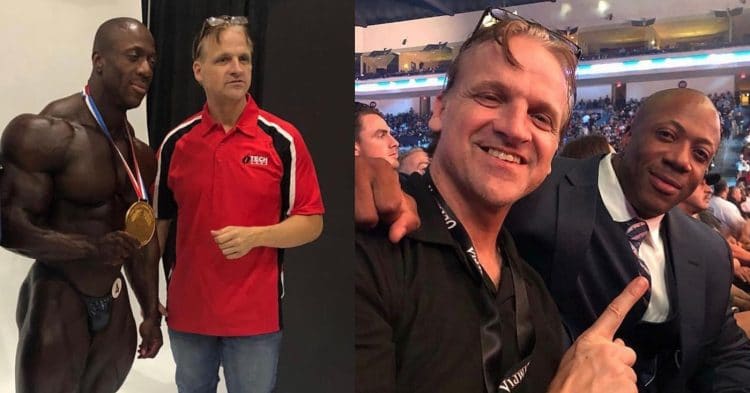 Fans and athletes alike were in total shock to hear that Shawn Rhoden had passed away. However, his coach, Chris Aceto says that this did not surprise him to hear, given all that Rhoden had been through.

Aceto had worked with Rhoden for a while, helping to get him to the point of being crowned the 2018 Mr. Olympia. He even stuck with Flexatron through his legal issues, and the accusations of sexual assault that left him without a Pro Card and unable to compete, since that 2018 Olympia.

So naturally, Chris was devastated to hear the news that Rhoden had passed away suddenly, reportedly due to a heart attack. Although as he explained while speaking in a recent interview, he was not surprised to hear this happened, after all of the things that Shawn had been through in the last three years.

“You want the raw answer? (I was) not surprised (to hear the news). Not surprised one bit. If you listen to this show, for the last three years I’ve been saying, when you ask me or when people around the country ask me, ‘How does Shawn hold up?’ No one holds up under the circumstances he was under. No one holds up,” Aceto said.

“Shawn won $400,000 at the Mr. Olympia, he had a incredibly impressive contract in ’18, from winning that show. Worked his whole life to win that title, and all of that was taken away with a phone call. The entire industry turned its back. So am I surprised, no.”

Chris Aceto went on to explain that, on the surface, it seemed like Shawn Rhoden was dealing with these issues with composure, but he was internalizing most of his stress. A lot of that stress came, not only from the serious allegations that were being levied against him, but by the fact that he could not do the career he dedicated his life to for three years, while sitting in a legal limbo.

Read also: Flex Lewis Pays Tribute To Late Shawn Rhoden: ‘I Feel This Life Could of Been Saved’

Chris told a story of the first time he saw his father cry, because he was struggling to find a job. He says that this stress of finding a way to feed your family would get to anyone, Shawn included.

“The only time I saw my father cry, he was sitting on the front steps of my house. I came home from school, I couldn’t believe it. I thought someone died. He couldn’t get a job. He didn’t really have any skills, and the work that he had done for 25 years, he had lost his job… He couldn’t get a job, so he couldn’t provide for five kids, let alone himself. His livelihood was gone,” Aceto said.

“If I told Dave Palumbo, I heard Dave Palumbo, he accidentally drove over a little kid at the playground. He killed a little kid by accident, and he’s going to go to jail for 20 years and you’re never going to see your three little kids or your wife, ever. You would either go into the jail and pick up some religious book, and read it one million times so that you don’t go crazy. Or you would go crazy. Or you may choose to kill yourself. Or you may have a heart attack of a broken heart.”

The Industry Turned Its Back On Flexatron

While Chris Aceto recognizes that anabolic steroids are not innocent in this regard, he believes that the stress and disappointment of not being able to do the thing that you love, was more of a factor in Rhoden’s passing. On top of that, Chris feels that the vast majority of the bodybuilding industry abandoned Shawn during the last three years of him not being allowed to compete.

At the end of the day, Chris Aceto still lost a friend and comrade with the death of Shawn Rhoden. Aside from speaking in this interview to remember Shawn, he also posted to his Instagram to talk about the positive memories he had, being alongside Flexatron.

“The best part of being in Shawn Rhoden’s inner circle is to bear witness to his desire, ability and need to validate others. Shawn was a giver. Not a taker. He shared his time with others. He encouraged others, including his competition. We spent endless hours together. Endless. And he never spoke badly about anyone. Ever,” Aceto wrote.

“He gave everything to this sport and more and when he needed help, doors closed quickly. At every turn. It made me very angry and even then Shawn never said a negative word in public or in private about anyone. Some whom could have helped. He was full of kindness, goodness and empathy. Traits we, who knew him well, traits that made us fall in love with him. And made us want to be better. He uplifted everyone. For these and many other reasons I will miss an athlete who naturally became a genuine and dear friend.”

It is clear that Chris Aceto, like the rest of the bodybuilding community, is devastated to hear the news of Shawn Rhoden passing away. This is truly a heartbreaking time to be a fan of the sport.