Flex Lewis Pays Tribute To Late Shawn Rhoden: “I Feel This Life Could of Been Saved” 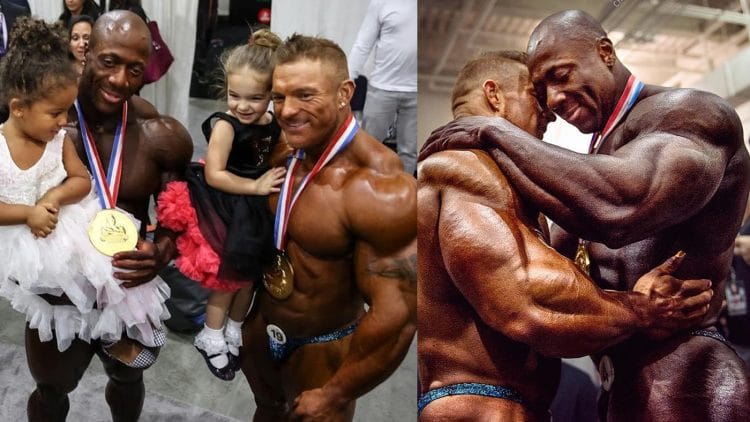 The recent death of 2018 Mr. Olympia winner Shawn Rhoden was a shock to the bodybuilding community, to say the least. According to multiple sources, his death was likely caused by a heart attack.

“Flexatron” was no doubt one of the greatest Open competitors in history. While his career was cut short by serious accusations following his Olympia victory, there’s no doubt he would’ve been continued to be a top threat in the division.

At just 46 years old, he went was too soon. Not to mention, it was possible he would’ve competed again at some point.

Many have paid tribute to the late champion including many champions such as Phil Heath and Brandon Curry, and even more recently 7x 212 Olympia champion Flex Lewis who was close with Shawn Rhoden.

“Something Needs To Be Done”

Flex took to Instagram with a message to honor his close friend of which the two had planned to meet up today, a day after news of his passing.

“This has taken several hours to write/ rewrite deleted. Why am I writing another obituary for another close friend 😢
We only yesterday spoke about plans to meet up today, after 3wks on the road I was looking forward to catching up with my friend.”

The two were apparently inseparable when together and they’ve shared some special moments together including winning the Olympia trophy and each having daughters close in age.

“I took the call about Shawns passing at 2am and not slept since. All day I have tried to make head n tails of it, but I started to think of some the wonderful memories I had with Shawn, we traveled the world competing together, working expos, shows, guest posings and I will hold on to them memories dearly. My heart goes out to his daughter who is around the same age as Adiena I have posted photos of our last win together were we got to celebrate with our Olympia trophies and our biggest trophies our daughters.”

Flex also expressed frustration with some of the comments he’s read and speculations of Shawn’s death.

“As the night turned to morning I started to see posts and read some of the most unbelievable things today, just like I did when Dallas passed away. I am deactivating comments because quite honestly I don’t wanna read opinions on how you thought he died, and what he should or shouldn’t done.”
–
“Celebrate a man, a Mr Olympia champion whom you have cheered for, met at a expos taken photos with.”

But Flex too believes there needs to be more health checkups and preventative measures taken for athletes as there’ve certainly been too many bodybuilding deaths as of recent. Once Classic Physique and more recently 212 competitor George Peterson died right before the 2021 Olympia which was incredibly unexpected.

“I do agree that something needs to be done for the future, too many athletes are not having regular health checks, I feel lives can be saved if something is implemented or you can’t compete.
We lost a good man today, a friend, a father and a champion, I say this with great sadness but I feel this life could of been saved.”

Arnold Schwarzenegger recently spoke out as a result of the increasing number of deaths in the sport. He’s called for more testing or promoting “smaller” divisions as he believes the Classic Physique division is a much safer category due to the size of the athletes compared to Men’s Bodybuilding.

We won’t speculate as to the cause of anyone’s death but it is becoming a real concern.

Again, we’d like to extend our deepest and sincerest condolences to the family, friends, and supports of the late Shawn Rhoden.