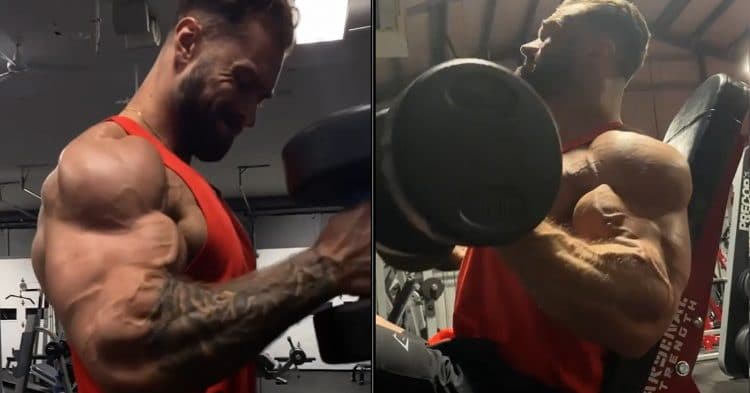 Every time he steps on stage, Chris Bumstead is having an increasingly more complete physique. Now the two-time Classic Physique champ reveals one of his favorite workouts to boost his biceps.

For all intents and purposes, it seems that Bumstead was right about his assessment of the direction Classic Physique is going. After taking the throne from Breon Ansley in 2019, he claimed that the judges were favoriting his look over others.

This was backed up last year, as Chris got a second straight Olympia win and silenced the doubters of his status as the best. He had shown big improvements all around, with his back being the topic of conversation afterwards.

Related: Chris Bumstead Reveals Back Workout He Is Using For ‘Perfecting My Form’

One of the parts of Chris’s physique that he has made a ton of progress in, is his biceps. That being said, he is constantly working to bring them up and fine tune them even more, and that was the topic of a recent post to his Instagram.

“Some of my favorite biceps exercises to incorporate (typically after high volume preacher curls),” Bumstead wrote.

The exercises he shared are a nice additive to his regular arm workout. Like he says, he likes to sprinkle these sets in after doing preacher curls, but it would be a nice addition to any arm day.

Here are the bicep-boosting exercises, in Chris’s words:

Bumstead says these sets are a good addition to an arm day to get a good pump in his biceps. It is clear to see that too, as his arms look about as pumped and vascular as they can be without bursting through his skin.

Last year saw Chris Bumstead really find his confidence and motivation, and the results were clear. He has been continuing to tweak his physique and bring up his weaker body parts, and that is what he expects to do throughout the rest of the year.

Judging from the way things have gone so far, he seems like he has the potential to continue his reign as champion. However the rest of the Classic Physique division is hot on his heels, so he will have to keep working to stay ahead.