Bodybuilder Chris Bumstead caught up with Hany Rambod to discuss how he would train and diet for a move to Men's Open. 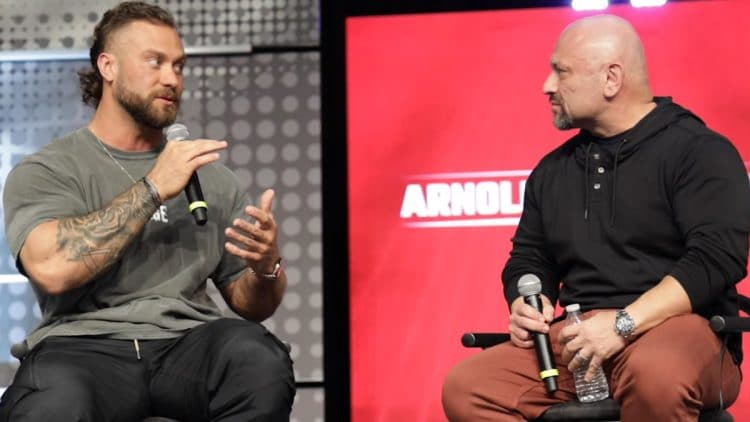 Three-time Classic Physique Olympia champion Chris Bumstead has made a career out of intense preparation. In a recent Q & A with Hany Rambod at the 2022 Arnold Classic, Bumstead signals that there is a possibility he could one day compete in the Men’s Open division.

Leading the pack, Chris Bumstead has established himself as one of the biggest threats in the Classic Physique division. Staying on top is no easy task, and “Cbum” maintains that breaks from the sport are what enable him to come to Olympia each year with a refined package. The credentialed bodybuilder takes preparation seriously and has garnered tons of popularity for his willingness to share diets and workouts with his following.

During his bulking season to prepare for shows, Bumstead has revealed that he ingests over 5,000 calories to pack on muscle. This stage is especially important this year because Chris is rebounding after suffering from a COVID-19 infection last Dec. As a result of the illness, Chris said he lost a considerable amount of weight due to the virus. After staying on top of the Classic Physique mountain for quite some time, fans have wondered if and when Chris might make the move over to Men’s Open bodybuilding. It appears we have our answer.

Bumstead met up with Hany Rambod in a YouTube video to discuss the possibility of taking to a Men’s Open bodybuilding stage before retiring.

“I just went right to classic but there’s a lot of jokes now, like “Is Chris ever going to do Open?” And we kind of hint at it. I don’t know, maybe one time before I retire. I won’t prep for it. Might happen.” Chris Bumstead said.

“I’ve been debating when I’m like five weeks out. I’m about fifteen pounds heavier but still in decent shape. So, I’m debating just hopping into a show with that look and then cutting down the extra twenty pounds or whatever to make it to Classic. Do that one year and see how it goes. “

After hinting at a possible one-off in Men’s Open, Rambod pressed Chris on his diet and training, wondering how it might be affected if Chris were to start preparation for a whole new bodybuilding division.

“Training-wise, no, not at all. I’ve trained my whole life with my brother-in-law, Iain Valliere and he is literally 305lbs right now. While I’m not as strong as him, he’s a beast. I can keep up with him in any workout. We do the same plan, the same kind of stuff. It just comes down to the other things we’re doing throughout the year. I take a lot of time off at some points and let my body kind of relax a little bit. Then, I get back into it. But I make sure my variables change like food and stuff like that and I keep my training intensity the same as I would in the Open.”

According to Chris, training would be less affected by a change to Men’s Open than his diet would be. While Bumstead normally enters Classic Physique shows at 230lbs, the three-time Classic Physique Olympia champ believes he would pack on some extra muscle if he did one day make the jump.

“I’m not quite there, I was lucky. So, my height is just about exactly six-foot-one and I’ve always been six-foot-one on the dot. So, conservatively, I was coming in at 230lbs and under but finally they were like, ‘you’ve been six-one for three years, now you can guarantee the weight for that is 240lbs. So, because of that, there’s actually some weight I can put on. Like I said, I competed at 236lbs last year. So I technically four pounds I can still put on. I just really take my time with it.”

After Olympia this year, I took three months off training, and I lost almost thirty pounds. It was a lot of moving and cardio to focus on my health, to give my body, my muscles and everything a break. My goal is to really last as long as possible in the sport and be as healthy as possible and I don’t want my physique to look aged, old or tired. So, I want to be fresh every year for the Olympia and just trying to take it all slow. “

Given the degree of preparation Chris implements during bodybuilding seasons, Bumstead could easily shake up the Men’s Open landscape on the biggest stage of the year. Chris Bumstead wouldn’t rule out a future move to Men’s Open but if he does make the switch, he believes it will be a one-off in the sport.