Elite bodybuilders Chris Bumstead and Iain Valliere joined forces and focused on the lower body in a recent training session. 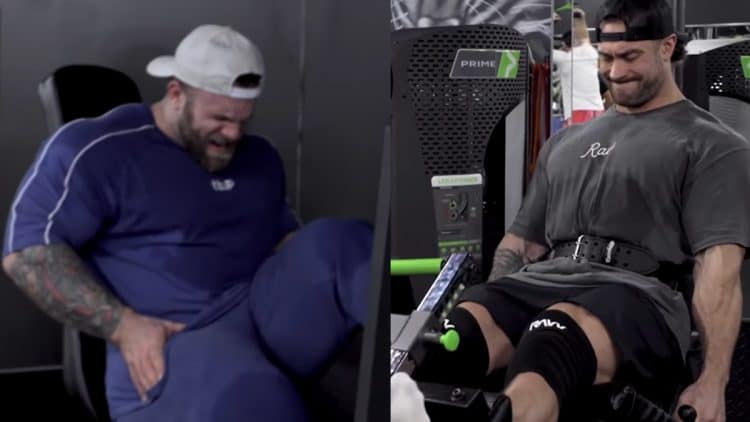 Despite competing in different bodybuilding divisions, Chris Bumstead and Iain Valliere know how to push each other during the offseason to achieve results. Recently, the pair of bodybuilders shared a thorough leg day workout and both men are continuing to make gains while outside of competition.

Valliere is Chris Bumstead’s brother-in-law and the two like to train with one another to generate improvements to their respective physiques. Iain Valliere began to catch headlines in the sport of bodybuilding after his 2020 season. The Men’s Open competitor secured third place at the Tampa Pro show.

Following the third-place performance, Valliere cemented his name in the sport after nailing first prize at the highly competitive 2020 New York Pro. The bodybuilder attempted Mr. Olympia the same year but his efforts resulted in seventh place.

In 2021, Valliere had a huge year. The bodybuilder competed in four major shows and won half of them. First, Valliere won the Tampa Pro and the Texas Pro handily. Then, the Canadian athlete took home silver at the Arnold Classic. However, when he attempted Olympia again, he placed in seventh once again.

Meanwhile, Chris Bumstead is looking to make it a 4-peat when he brings his physique to the Mr. Olympia contest in Dec. After placing runner-up at the biggest show of the year in 2018, “Cbum” was determined to improve his placement at Olympia. The bodybuilder delivered and not only took home the Classic Physique crown twice but three times consecutively (2019, 2020, 2021). The sheer fact that he defended his title twice is outrageously impressive in a sport as competitive as bodybuilding.

“What’s up guys, we’re here today training a little quads. We got CBum here. It’s been a while since Chris has done a hard workout. Yeah like I said, we will do some quads today, start with some hacks, then going to move on to the leg press and all that kind of fun stuff. Yeah, so we’re going to get into it here, and start warming up and get into hacks.” Iain Valliere said.

“Okay, so we finished five sets there. Two sets, we worked up to a top set. We were aiming for 8-10 but I think we were all in the 10-12 range which is good. An average of 10. Now we’re moving on to the leg press. We only have one set here. Working up to a set of 15 with a very small pause, then pushing up five more, after failure. So re-rack, actually I think we can keep it unracked, keep the tension on, a couple seconds try to get another 5. Fifteen pushing 20, so we’re going to work up here and hammer out that one top set.”

The two began the video by working on their quads. Squats are a useful exercise as they help pump blood to the whole body and enable the user to grow their legs effectively. “Cbum” and Valliere utilize hack squats, and unlike barbell squats, the exercise produces less stress on the lower back.

Following Chris Bumstead’s win at the 2021 Mr. Olympia, he decided to take some time off given that he’s been hard-at-work for more than six years straight. As he re-introduces his body to more demanding workouts, it appears the 3X Classic Physique Olympia champ is keen on bringing a complete package to his next show as he usually does.

On the other hand, Valliere remains an active competitor but has still flirted with the idea of retirement as he touched on the topic in a podcast episode with Fouad Abiad recently. Regardless, the bodybuilder looked committed in his recent video. The two finished with some leg presses to put a stamp on the workout.

“So we just finished up on our little superset there. Three rounds, quad extension with the hold and then the lunges, we did 15 reps on the extensions. About 10-15 on the lunges per side. That was tiring. Now we’re going to finish up here with a single leg press.” Valliere concluded.

Given how thorough the routine was, it’s safe to say Chris Bumstead and Iain Valliere aren’t skimping on leg day. After watching the pair of bodybuilders crush a few exercises, it looks like both are destined to have an explosive 2022 bodybuilding season.