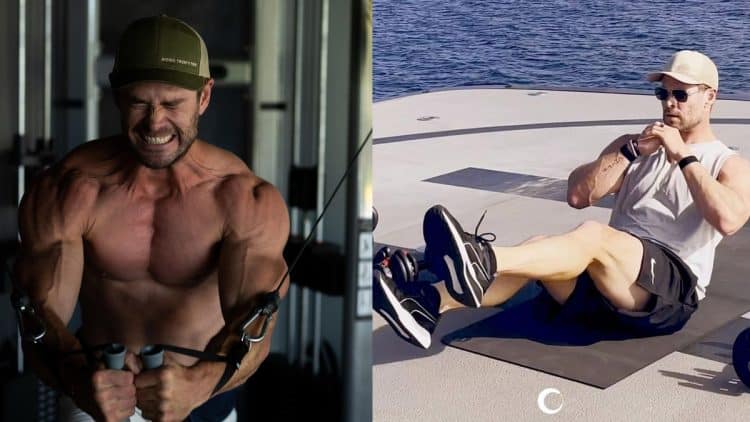 Chris Hemsworth boasts one of the best builds in Hollywood. Being one of the busiest actors in the industry, Hemsworth has also made a name for himself in the world of fitness. In a recent post made on his Instagram, Hemsworth shared a fierce 200-rep workout challenge that utilized five full-body exercises.

Before Hemsworth became a prolific actor, he was a budding fitness enthusiast. Although he was in decent shape before gracing the silver screen, the Australian A-lister took his physique to new heights when he got casted as Thor in Marvel’s Cinematic Universe. He brought an incredibly ripped physique to mirror the comic book superhero, which many have described as an accurate portrayal of the character.

Hemsworth did not stop there as he underwent another transformation for the film Extraction. He was depicting a Black Ops Mercenary and needed to add even more muscle to his frame. The 38-year-old revealed that he utilized bodyweight training to get ready for the role, focusing on speed, agility, and strength instead of lifting free weights.

Following his role in Extraction, Hemsworth did not take time off because he had to get right back to work for his latest installment in the Marvel movie franchise Thor: Love and Thunder. Hemsworth packed on the pounds and got massive for the ambitious movie role. He recently shared a behind-the-scenes photo from the production sets of the film, showing off his huge biceps.

In a recent post uploaded to his Instagram, Hemsworth shared a grueling “200 Club” workout that consists of doing 200 reps each for five exercises that use the full body.

“If the sea sickness doesn’t get me. This bad boy certainly will. We call this the 200 Club @centrfit Good luck!” Hemsworth wrote.

The new 200 Club workout challenge comes as part of a series Chris Hemsworth is doing to promote his fitness lifestyle app called Centrfit. He previously announced that he would share workouts that require minimal to no equipment with his 56 million Instagram followers.

Hemsworth has no plans of slowing down when it comes to working out. While his latest entry may not be suitable for everyone, his previous workouts such as his go-to core workout serve as a great starting point for beginners.

How To Do The Shoulder Press (With Band): Tips, Benefits, Variations, Alternatives, Sets and Reps

Best Diastasis Recti Exercises for Moms to Get Their Body Back