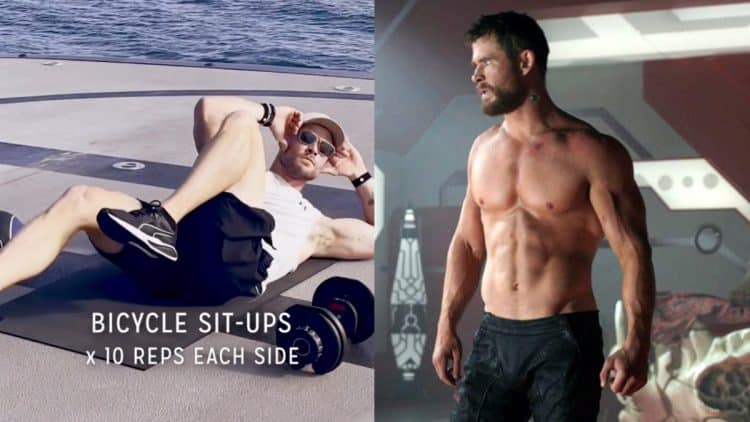 Marvel superstar Chris Hemsworth boasts one of the most incredible physiques in Hollywood. In a recent video posted on Instagram, Hemsworth shared a grueling core workout that he likes to use regularly for his abs and overall core strength.

Chris Hemsworth always had a passion for fitness but reached incredible levels of success as an actor. He took his physique to the next level in preparations for the latest installment in the Marvel movie franchise Thor: Love and Thunder. While he was already jacked, Hemsworth added even more muscle to his frame to accurately depict a burly superhero.

The A-lister likes to utilize functionality when training and credits bodyweight workouts for his recent transformation. He shared a behind-the-scenes photo from the sets of his latest Thor film, where he showed off his gigantic biceps. Hemsworth does not shy away from the gym as he enjoys intense training sessions and sticks to a strict diet.

With nearly 56 million followers on Instagram, Hemsworth encourages his fans to stay fit by regularly sharing workouts that he does himself. He launched a fitness lifestyle app called Centrfit and announced that he would be sharing workouts from the app for the next eight weeks. These workouts will require minimal to no-equipment, all from the deck of a naval ship in the middle of the ocean.

In a recent video posted on his Instagram, Hemsworth shared a staple core workout that he likes to use.

“Back on the boat with my go-to core workout. Try at your own pace but keep pushing yourself! Follow along and don’t stop until you hit 50 reps! You’ve got this!”

Note: all exercises have 60-second rest periods in between each set

Chris Hemsworth previously shared a heavy chest workout that helped him achieve his signature ripped physique. This workout is part of a series of training sessions he’s sharing with fans that involve little or no exercise equipment.

Last month, he challenged his fans to an insane 50-rep full-body workout that is sure to leave anyone exhausted. Given the variety of his workouts, Hemsworth continues to receive notoriety for his relentless work ethic.