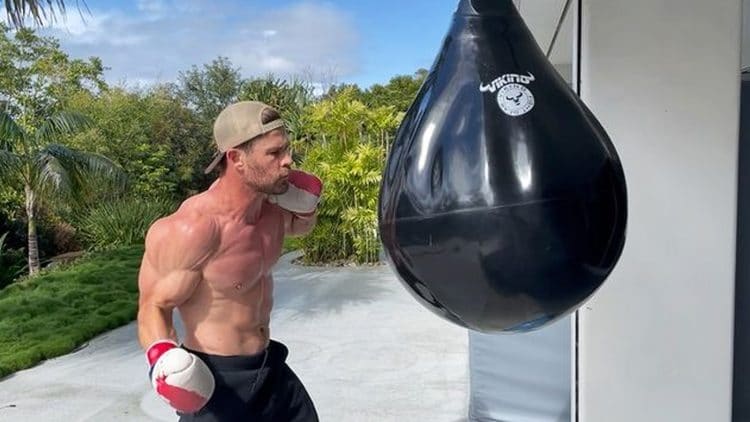 There is no doubt that Chris Hemsworth is a versatile actor who leaves no stones unturned to fit in the role. The 38-year-old actor is also a perfect role model for those who adapt fitness as their lifestyle choice. Currently preparing for his role in the sequel of Netflix movie Extraction, Hemsworth is bulking up to befit the role of a black ops mercenary.

Needless to say, the process involves vigorous training and military lifestyle. The Australian actor recently shared his bodyweight workout with fans on his Instagram account. Stating that the switch to bodyweight workout is primarily for agility, strength and training, Chris Hemsworth wrote:

Hemsworth added a video of his workout in the Instagram post. The caption included details of the workout and appealed followers to ‘give this little workout a go’.

Courtesy to Chris Hemsworth’s Instagram account, you can watch the video here before trying the workout at home, backyard, gym or wherever you prefer to push your body to its limits:

Chris Hemsworth’s agility, strength and speed are on full display in the video. The post drew admiration from a number of celebrities including fellow film stars Josh Brolin, Jake Gyllenhaal and MMA legend Donald Cerrone to name a few.

‘Damn! Once I finish this pizza I’m going to do that,’ Josh Brolin commented.

As impressive as Chris Hemsworth’s body transformation for The Extraction sequel looks, the true herculean task is on a whole new level. Hemsworth will play Pro-Wrestling legend Terry Bollea aka Hollywood Hulk Hogan in an unnamed biopic.

The towering 6ft-7in, 300lbs physical specimen, Hulk Hogan is widely regarded as ‘the most recognized wrestling star worldwide and the most popular wrestler of the 1980s’. Chris Hemsworth is used to the practice of exhaustive physical transformation, courtesy to ‘Thor’.

The Australian actor, who generally weights around 91kg (200lbs), is going to have to put in extra efforts to look the part. All things considered, if anyone is capable of making it happen, it’s Chris Hemsworth. When photos of Hemsworth’s jacked phisique went viral in 2020, Hulk Hogan responded via tweet:

He’s already there! He’s ready BROTHER!!! But is he good looking enough to play me lol,lol,lol. HH

He’s already there! He’s ready BROTHER!!! But is he good looking enough to play me lol,lol,lol. HH pic.twitter.com/q6LLfWUGgL

What do you think of this insane workout from Chris Hemsworth? Is this something you are interested in trying out for yourself?

Andrea Sunshine, a 53-year-old woman, has already made headlines numerous times for her insanely fit physique on social media. This...