If you want to look like a boxer who should not be messed with, you have come to the right place. 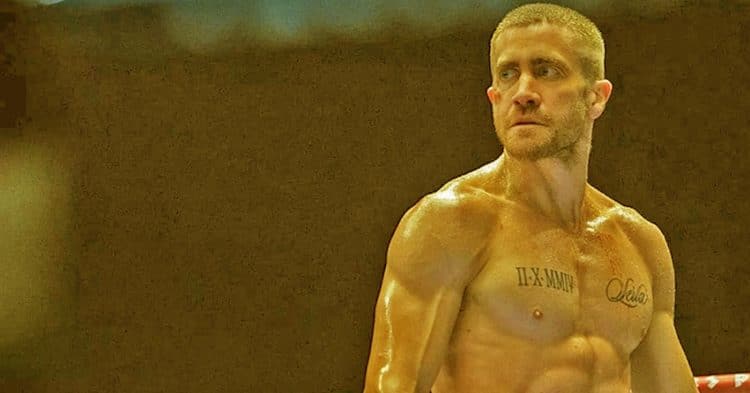 Fitness enthusiasts wait for months (if not years) for a kick-ass boxing movie. Only a few other things can get a lifter as pumped up to hit the iron paradise as the Rocky title track.

And when you do get a boxing movie that checks all the right boxes, you cannot stop talking about it with anybody who would lend you their ears. Southpaw is one such movie that has earned itself a cult following. Do not get us wrong. Jake Gyllenhaal looked amazing in Prince of Persia and Spider-Man: Far From Home, but he outdid himself in Southpaw.

“We literally turned him into a beast. Jake, my god, he’s a very electric, powerful fighter in this movie,” said Southpaw Director Antoine Fuqua in an interview with Deadline. “He’s so committed and gives his heart. The word is sacrifice.”

Watch Southpaw, and you will say the same thing about Jake Gyllenhaal where he plays the role of Billy Hope, a talented but troubled young boxer.

Jake trained for five months for his role in Southpaw. He spent over six hours a day training, and on top of that, he spent most of his free time at the gym. In short, he practically lived inside a gym for five months.

Antoine Fuqua, an avid boxer himself, wanted Gyllenhaal to train like a pro boxer preparing for a career match. Terry Claybon (the owner of lb4lb boxing gym) was hired to help Jake get in the best shape of his life. Terry has trained with boxing greats like Muhammad Ali and has been training Fuqua since he made Training Day.

Jake Gyllenhaal did not have the start he would have liked. He had lost weight for his last film Nightcrawler and only weighed 147 pounds before starting shooting for Southpaw. Thanks to Claybon and his hard work and discipline, he gained around 30 pounds of lean muscle mass before filming began.

Now, if you have been paying attention, the last line would have raised some questions in your head. How in the world did Jake Gyllenhaal put on 30 lbs of muscle mass while training as a boxer for six hours every day? We will answer this and much more in this article.

Since Gyllenhaal was spending most of his day in the gym, he needed a truckload of calories. Excess calories are stored in the form of glycogen in your body that is used as a source of energy. Stored glycogen makes sure you have enough fuel in the tank to get through the day.

Jake ate around 6-7 meals every day during his transformation and maintenance phase while filming for the movie. If you have never followed a bulking diet plan before, be warned – this is going to be rough.

Gyllenhaal loaded up on quality sources of protein for building muscle mass. Unlike other celebrity transformation programs, Jake did not shy away from carbs and fats. He consumed his fair share of both macronutrients and went all out in the gym to make sure he was turning the excess fat into muscle.

Also Read: What Does Glycogen Have To Do With Making Gains?

Here are a few elaborative guides on some of the supplements Jake Gyllenhaal used:

If you think doing 1,000 sit-ups right after getting out of bed is brutal, wait till you heard this. You will be heading out for an eight-mile run right after you have finished your 1,000th sit-up. Jake relied on fasted cardio to burn off all the excess body fat.

After breakfast and a couple of hours of rest, Jake Gyllenhaal went straight to the gym where he did 1-2 hours of boxing and sparring. We will discuss his boxing training later in the article.

To punch at your hardest, you need a solid core. Core exercises are crucial for boxing because the core transfers forces between the extremities (upper and lower body). Before any powerful and rapid movement can occur through the limbs, the core needs to be solid and stable. The more stable the core, the more powerful the movement

After the grueling core routine, we get to the meat of the Southpaw training. This is where the magic happens. For the next one hour, Jake Gyllenhaal practices boxing drills focusing on his footwork and defensive movement. He also dedicates time to practicing combinations that would be used in the movie.

Jake’s shredded arms, shoulders, and back are a result of dedicated bodybuilding workouts. While an orthodox boxer might not include resistance workouts in his training routine, an actor needs to work on his mirror muscles.

If you ever wondered how Jake Gyllenhaal built those washboard abs, now you know the answer. He ended his day with 1,000 sit-ups. We can only imagine how sore his abs were in the first few weeks of the Southpaw training program.

If you think this is too much, you are in for a surprise. We have just outlined Jack’s daily schedule. We are yet to lay out what he did in the 1-2 hours of boxing, workouts, and cardio routines.

If you want to follow in Jake Gyllenhaal’s footsteps but cannot make the time for the program, you should pray for a big inheritance or a lottery win. They should free up enough time for you to follow the program to the T.

These nine exercises constitute one round. Gyllenhaal performed three rounds in total, resting 1-2 minutes between each round.

1. Jump rope – Jake started his boxing training routine with 15 minutes of jump rope. The clips of Billy Hope skipping rope like a legend is a result of Jake’s dedication.

2. Footwork drills – Gyllenhaal had to work extensively on his footwork. “Defense was the most important thing for us to practice because he was really going to get hit, and he needed to protect himself,” says Claybon.

3. Shadowboxing – After defense drills, Jake practiced forward-step movements throwing different punches, and learning the professional combinations to be used in the movie for six rounds, 18 minutes.

4. Bag work – In the morning and afternoon training sessions, Gyllenhaal switched between heavy and speed bags for three rounds, nine minutes each. Claybon and Jake also included the double-end bag in their training, working on mixing offensive and defensive motions.

5. Speedball – Jake Gyllenhaal worked on the speedball to improve his timing, rhythm, and arm endurance.

6. Focus pads – Focus mitts are used as an augment to sparring, with a more explicit focus on the puncher than the feeder. It helps in developing good punch combinations and defensive maneuvers such as slipping, bobbing, and weaving.

7. Sparring – No boxing training can be deemed complete without a sparring session.

10. Get punched in the face by real fighters – This is where the rubber meets the road. Jake got beat up in the movie, and he had to take a few real blows. The producers and director got Jake ready for the task by making real boxers punch him in the face. Or were they taking revenge for his high movie fee? We will never know.

These nine exercises constitute one round. Gyllenhaal performed three rounds in total, resting 1-2 minutes between each round.

A celebrity physique transformation is nothing new, but Jake Gyllenhaal’s transformation for Southpaw shocked most people. He went all out and showed grit, passion, and determination.

Jake Gyllenhaal had already proved his mettle in the acting department, but now his fans also look forward to his physique transformations. He has set the bar high, and we cannot wait for his upcoming movies.