Chris Hemsworth seems to have some real life power in those hands! 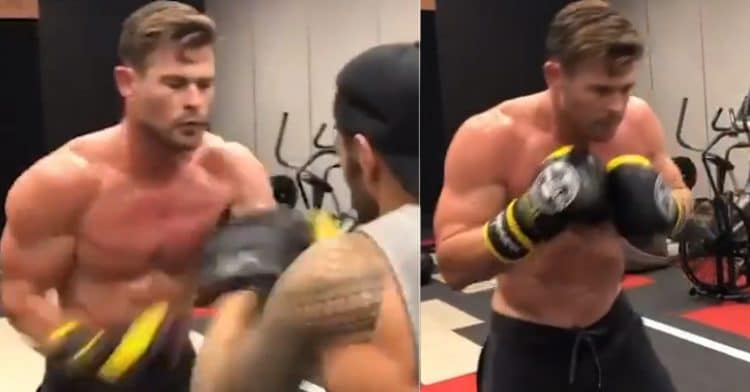 He’s the hammer-wielding “god of Thunder” from Asgard in the Marvel Cinematic Universe films but in real life, Chris Hemsworth is just an extremely handsome, well-built, charming Australian.

But as evident by a recent mitt drill session, Hemsworth apparently does have something in common with the superhero he portrays… and that’s the fact that he does possess impressive power.

He Tweeted a clip of him hitting mitts and showing off his skills… not too shabby, especially compared to a lot of non-combat sports athletes who’ve posted their training sessions to social media.

Not to mention, he’s an actor and we don’t expect him to look like a seasoned pro. Hemsworth looks jacked though and it’s no doubt a great way for him to stay in shape.

Plus, he’s supposed to transform his physique to play iconic wrestler Hulk Hogan in an upcoming Hogan Biopic. So the massive, ripped look is what he’s working toward.

ESPN Ringside shared his post and wrote “Chris Hemsworth brought some thunder on the mitts.”

Chris Hemsworth brought some thunder on the mitts⚡️💪

Read more: Chris Hemsworth Goes From Thor To Hulk By Bulking Up For Hulk Hogan Biopic

Now, if you’ve kept up with celebrity boxing, you’re probably aware that brothers Logan and Jake Paul have made huge names for themselves in the boxing arena.

Sure, they aren’t pro caliber and have only really boxed to settle beefs. But they are still heavily involved in the sport nonetheless. Jake is coming off a KO victory over former NBA player Nate Robinson, while Logan is preparing for a match against boxing legend Floyd Mayweather Jr. this February.

So naturally, the Paul brothers were brought up a lot in the comments on Twitter under the above video of Hemsworth throwing hands.

Funnily enough, older brother Logan wants a piece of Hemsworth after his match with Mayweather, Tweeting in response to the above video, “I’ll fight him after Mayweather“.

I’ll fight him after mayweather https://t.co/kIqkYlb9fz

Whether or not that could be a possibility, who knows but a lot are suggesting a matchup too on Twitter. But maybe after boxing arguably the greatest of all time in Floyd Mayweather Jr., Logan will reconsider if he ever wants to step in the ring again… we’ll see!

Meanwhile, Strongman icons Hafthor Bjornsson and Eddie Hall are set for a matchup later this year, and they are ready to smash each other’s faces in at this point.

Check out these recent posts on Eddie Hall and Hafthor Bjornsson.

But it seems celebrity boxing has become so popular as of late and there’s a lot to look forward too.

However, we don’t want to jump to conclusions about Chris Hemsworth. After all, the 37-year-old is regularly featured in the media for his exercise routines and he even has a fitness app called Centr.

So it’s most likely he’s just keeping fit for his films, and improving his boxing skills. But judging from the clip, there’s a possibility he could give Logan Paul a run for his money.