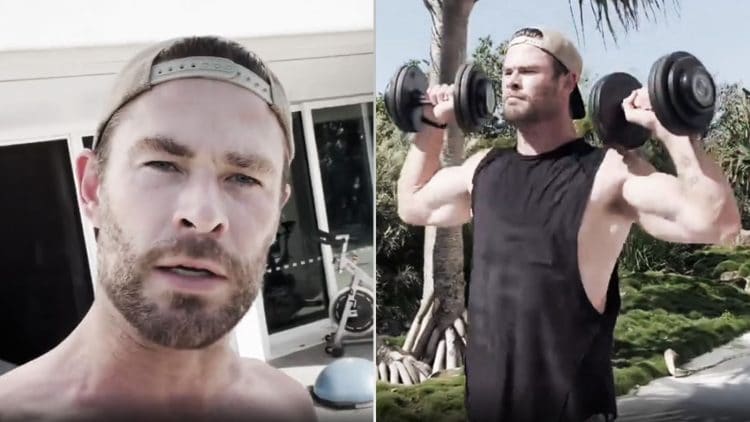 Apart from being a versatile actor, Chris Hemsworth is without a doubt one of the fittest individuals we know. The Thor actor’s multiple body transformations only show the amount of discipline and work ethic he adheres to. Last weekend, however, was a little different. Hemsworth had a fun weekend and added an extra workout to his routine to shake off dullness.

In a recent Instagram video, Chris Hemsworth admitted that he woke up feeling unmotivated and a ‘little dusty’ after a couple of celebratory drinks over the weekend. So, Thor took it upon himself to get the motivation back and put himself through an arduous workout to sweat the demons out. Hemsworth started the video by saying:

“Woke up this morning. Motivation levels are at an all-time low. Feeling very flat, little dusty. Couple of celebratory drinks – too many this weekend. But (I) thought, “You know what? Let’s get this to yourself and undo it mate! Better sweat out the demons. So we got on treadmill 15 min warmup there, big crossfit circuit, ball slam, lunges, sit through, spin work, Barre code, chin ups, push ups. Now feeling 100%. Back to normal. Movement creates motivation”

Chris Hemsworth then went on to outline the workout routine he went through. He later expressed his satisfaction at getting back to normal with the feeling of being at a hundred percent again. The 38-year-old’s workout entailed a 15-minute warm-up on the treadmill, a CrossFit circuit, ball slams, lunges, sit-throughs, sprint work, bear crawls, chin-ups, and push-ups.

In the caption, Chris Hemsworth advised his followers to adopt physical training and workout into their lives not only for general fitness but also to improve every single aspect of their lives. The caption to Chris Hemsworth’s post read:

“Lacking motivation? Get moving! Feeling flat? Get sweaty!! I can tell you with the utmost confidence that the simple add of exercise in your daily routine will not only add a big ol smile on your dial it’ll improve every aspect of your life, more energy, better sleep, mood elevation, reduce feelings of anxiety and depression, protect against many chronic diseases, the list goes on. Movement creates motivation!! Action creates energy!! Get after it.”

Chris Hemsworth is currently preparing for several roles that will require him to undergo many body transformations and show new wrinkles in his acting. The Australian actor will come back in the sequel of the Netflix movie Extraction as Tyler Rake, the black market mercenary. Also, the latest installment in the Mad Max series will be a prequel centered around Imperator Furiosa – the character popularized by Charlize Theron in the 2015 movie Mad Max: Fury Road. Chris Hemsworth will play a leading role in the movie. However, it is unclear if the leading character, Max Rockatansky, will feature in the movie.

Thor, however, will probably undergo the most difficult body transformation of his career in the Hulk Hogan biopic. Although there are no official reports, rumors say that the Australian actor will play the legendary wrestler in the Netflix biopic. Hemsworth and Hogan have both hinted that the rumors could be true. However, let’s wait and see what happens. Which one of Chris Hemsworth’s movies are you looking forward to the most? Let us know in the comments.

My brother has that Hogan Pump on Jack,looks like he could slam Andre brother HH pic.twitter.com/VEscB93crm

The Hemsworth brothers look like superheroes when the cameras aren't rolling but Liam stole the show after Chris wished him...