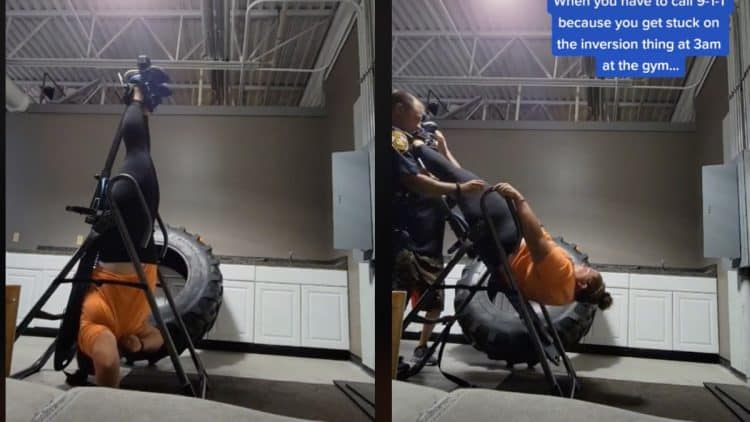 Working out in a gym can be challenging or intimidating for some given how many different exercise machines are out there. In a recent TikTok video, an Ohio woman got into an awkward situation after getting stuck upside down in exercise equipment, needing police intervention to get out safely.

It seems every other day, there is something wild going on at public gyms. In May, a female TikToker had a weighted ball thrown at her by a male gym-goer. After the scary ordeal, the man was subsequently banned from the gym she had a membership with. Given the prevalence of social media, most of these crazy coincidences are caught on video, which was the case for Ohio’s Christine Faulds.

Christine Faulds was working out at a local gym but faced a puzzling challenge in between her training session when she got tangled in exercise equipment, specifically an inversion table. She shared her hilariously unfortunate situation with her fans on TikTok, with the video garnering over 1.1 million views at the time of this writing. She shared another clip of the 911 call, which has received 415k views so far on the social media platform.

In a recent TikTok video posted on her account, Faulds shared footage of herself trapped by an inversion table. She uploaded a follow-up clip detailing the “embarrassing” 911 call she had.

Find all of the posts below:

“At least they didn’t send a whole fire crew,” she captioned under the first video.

“This is so embarrassing,” Faulds said. “There’s only one person at the gym and I got stuck in, you know that backboard thing. I’m stuck in this reverse, like, back decompression thing.

“I think the thing went too far and I just got stuck upside-down and cannot get myself right side up,” she continued telling the dispatcher. “I’m trying to get my buddy’s attention but he’s in the other room lifting. I’m sorry, I’m just stuck.”

Faulds talked to the dispatcher on the other end after calling 911 to seek help. The incident reportedly occurred at 3 a.m. at the 24-hour Powerhouse Gym in Berea. She was working out on the inversion table, which is equipment that allegedly helps relieve people’s back pain by relieving pressure off the spine.

She tried to record herself using the machine until the panic set in that she was actually trapped. The camera recorded the whole situation, including Faulds’ multiple unsuccessful attempts to get out. Since she was working out so late at night, there were very few people around. She managed to reach 911 through her smartwatch and appears to be in high spirits after the incident.

RELATED: Female TikToker Snaps on Gym Worker, Accuses Him of Being a Pervert for Staring, Joey Swoll Reacts

Despite the comedic tones of the accident, thankfully she’s okay and not injured. Faulds was lucky she got the help she needed to get out of the equipment, which lasted over 12 long minutes.

Fitness influencer Joey Swoll has developed a reputation for pushing back on the toxic gym culture that pervades many training...