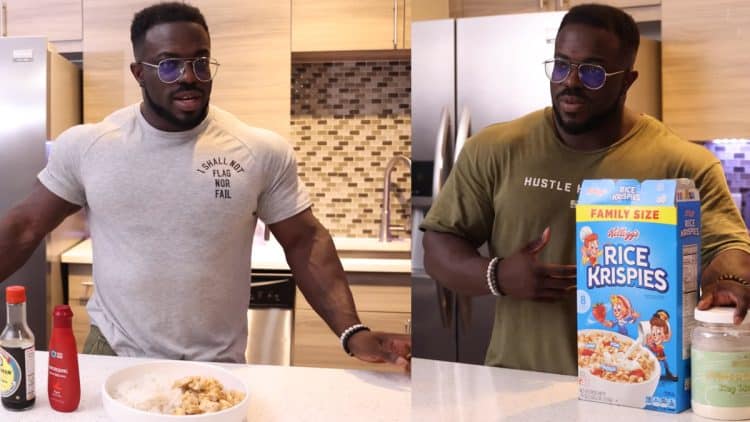 Classic Physique bodybuilder Terrence Ruffin last competed at the 2022 Arnold Classic—the second-most prestigious bodybuilding competition—and won the show for the second time in a row. The 28-year-old placed second at the 2021 Olympia, behind three-time champion Chris Bumstead. ‘Ruff Diesel’ will attempt to dethrone CBum when 2022 Olympia returns to Las Vegas, NV, from Dec. 15 to 18.

Ruff Diesel’s off-season diet necessitates consuming approximately 4,800 calories every day to gain muscle, roughly double of 2,600—his usual caloric goal during contest prep. Notably, the 2,200 calorie bump in the off-season does not happen overnight. Ruffin adds 200 calories to his diet every week until he reaches his goal.

“If you want to take your off-season seriously and you really want to grow, write down a meal plan and then each week take pictures of yourself just like you’re in a contest prep, just like you had a real coach…” Ruffin said.

The two-time Arnold Classic winner does not rely on exotic ingredients or the so-called ‘superfoods’ but rather makes use of regular foods that are a staple in an average person’s diet. Rice, chicken, eggs, nut butter, and protein shakes form most of his meals.

The stringent diet automatically puts a lot of ingredients or foods off the table for most athletes. But Ruffin uses seasonings to make the food taste as good as possible. He does not hesitate in using sauces and treats himself to a dessert from time to time during the off-season.

The 30-year-old prepares his meals up to four days in advance. He generally does not store cooked food longer than that because eating six to seven meals per day is easier said than done. Therefore the meals should taste good in addition to providing nutrition. Most foods tend to dry out and lose their flavor when stored for a long time, and not cooking them more than four days in advance is a good way to avoid that from happening.

“I think the easiest way to have an off-season or eat a lot of food is to make sure it tastes good,” Ruff Diesel said.

While cooking food in advance is time-efficient, Ruffin prefers cooking rice on the same day.

Ruffin eats six meals a day during his off-season. The first three meals include fast-digesting foods that do not meddle with his training. The slow-digesting foods like chicken, eggs, and desserts are scheduled for the second half of the day.

Ruffin’s day starts with an easy-to-prepare meal consisting of nut butter, pineapple, cream of rice, and a protein shake. This meal typically follows a fasted cardio session in the morning and consists of:

This one includes similar ingredients to the first meal but excludes peanut butter. The second meal is usually the pre-workout meal and consists of:

Ruff Diesel’s post-workout meal combines Rice Krispies and a protein shake. While explaining the reasons for incorporating so many protein shakes in his meals, he said:

“It’s just easier to digest. When I’m eating this much food and I’m training earlier in the day, I just want the food to get in my stomach, digest quickly, so I can feel good when I train.”

As mentioned in one of his previous workout videos, the 28-year-old replaces cream of rice with Rice Krispies in this meal due to their convenience.

Meals in the second half of the day typically include rice and chicken with some other foods. While speaking about how he likes to cook his chicken, Ruffin said:

“I always like to cut the fat off the chicken. I don’t like the taste of it, and I definitely don’t need the extra fat. We’re trying to be fat-free at the moment.”

The 28-year-old recently found that the chicken tastes better when you beat it a little before cooking.

“I don’t have a meat hammer, so I just punch it,” Ruffin said with hearty laughter.

To make the food taste good, Ruffin likes to chop the chicken into smaller pieces and adds seasoning while cooking. He is not a fan of dry and tasteless food, which helps make his meals enjoyable.

This is Ruffin’s most calorie-dense meal of the day. While rice and six eggs primarily provide protein and carbohydrates, a whole pint of ice cream adds approximately 500 calories and fat to the meal.

Ruff Diesel will next compete at the 2022 Olympia. The gains he has made during the off-season will pose a threat to Bumstead’s dominance in the Classic Physique division. After having scored a win at the 2022 Arnold Classic, Ruffin has momentum on his side to go that extra mile and score a win at the grandest stage of bodybuilding. Stay tuned to Fitness Volt for more updates.

You can watch the full video here, courtesy of Terrence Ruffin’s YouTube channel: