Check out performance that'll set the standard for this world record challenge! 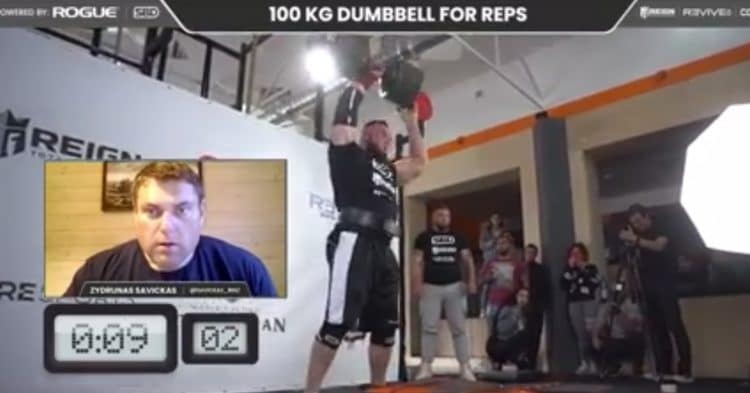 At only 23 years old, Ukrainian Strongman athlete Oleksii Novikov has established himself as one of the young, up and comers of the sport. He’s a 4-time Ukrainian Strongest Man and world record holder in the Manhood stone lift (220kg x 5 reps). Novikov splits his time between Strongman and his studies as a college student and so far, it hasn’t affected his ability to compete at the highest level with many of the strongest men in the world.

He made his debut at the 2019 World’s Strongest Man contest and although he wasn’t part of the top 10 competitors, it’s evident he has lots of potential to be a part of the future of Strongman competition.

And today, Novikov faced a very big, yet interesting challenge as part of the 2020 World’s Ultimate Strongman Feats of Strength series… to establish the record for the 100kg/220lb giant dumbbell lift by completing a maximum number of reps in 75 seconds. Novikov was the first to attempt this record as it hasn’t been done before.

Well, he completed 11 reps in about 65 seconds for the record and then called it quits. Although, anyone watching could see that he had a little more in him. But we’ll likely see other Strongman athletes come along and try to break this record now.

One man who likely has a very good chance is Mateusz Kieliskowski who holds the current Circus dumbbell press world record of 150kg/330lbs. However, if by chance the record is broken, Novikov will no doubt be back to try and reclaim the record.

Watch the performance below…

The Feats of Strength started with Hafthor Bjornsson breaking the all-time deadlift world record. Then Luke Stoltman attempted to break the log lift record but unfortunately failed the lift. But then, his brother Tom tried for the Atlas stone world record (286kg/630lbs) and was successful.

As of right now, there are six more Feats of Strength attempts left and you’ll want to stay tuned because we’ll have all the details.