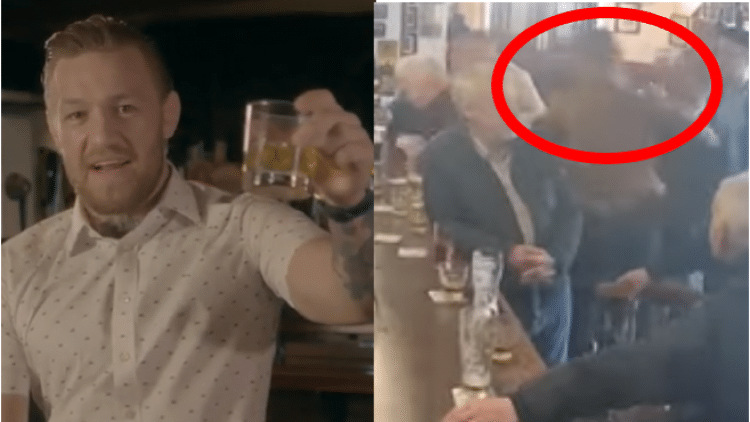 Conor McGregor could be in hot water, yet again. This time, it involves an incident with an old man at a bar, and all over some whiskey.

There is no doubt that McGregor is an incredibly successful person. From being the UFC’s first dual-weight champion, making a ton of money in the Mayweather fight, and even recently starting his own clothing line.

However, one thing he became known for was creating his own brand of whiskey – Proper No. 12. McGregor loves to push this whiskey brand, bringing it to his press conference with Khabib Nurmagomedov. His social media is constantly filled with talk of Proper 12.

On the other hand, it seems McGregor doesn’t like it when people refuse his whiskey. It was recently revealed by TMZ, that McGregor was involved in an altercation at a bar, in April. It seems that McGregor reportedly tried buying a round of Proper 12 shots for the patrons of The Marble Arch pub, in Dublin. According to the report, an older gentleman refused the shot. So instead of a shot of Proper 12, he got a cheap shot; a left-handed sucker punch from McGregor.

Check out the surveillance footage of the incident:

Following the strike, McGregor was dragged out of the bar, while his victim stayed seated. It would appear that no official charges have been filed, as of yet. However, officials from Garda, the Irish police force, issued this statement regarding the incident:

“Garda are investigating an assault incident that occurred at a public house in Drimnagh, Dublin 12, on 6/4/19 at approximately 2:30pm. Investigations ongoing in relation to this incident and no arrests have been made to date.”

This is not the first time Conor McGregor has been involved in the wrong side of the law. He was recently being investigated for a sexual assault incident, and also charged with some felonies after assaulting a fan outside a hotel. Of course, there is also the infamous incident where McGregor threw a dolly through a bus of UFC fighters.

As of yet, Conor McGregor has escaped these situations without facing and serious charges, or consequences. However, this incident may just change that.