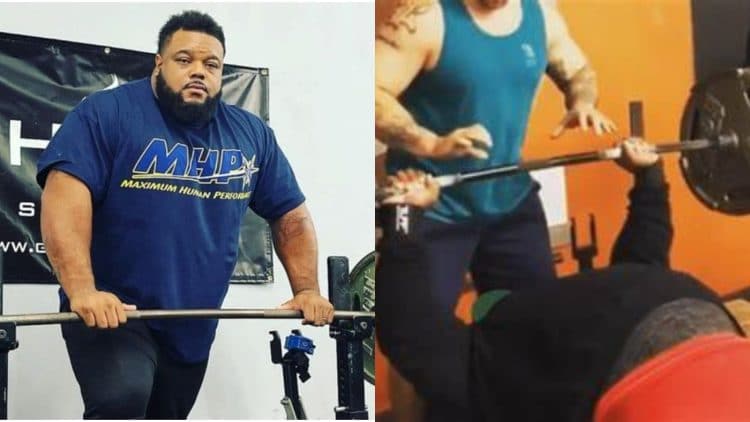 When it comes to powerlifting, few can match the raw strength of Julius Maddox. The 34-year-old American recently took to social media and showed off a raw bench press of 635lbs/288kg in five measured reps.

Julius Maddox made headlines after failing to execute on an 800lbs/363kg lift. While his intentions were to smash his own record, it appears those visions are on standby for now. Rewind to 2019, Maddox toppled Russia’s Kirill Sarychev’s bench press record of 738.5lbs. “Irregular Strength” continued to live up to his moniker and put the world on notice after pressing 739.6lbs.

Then, in February of 2021, Maddox set the all-time world record again after pressing a colossal 782lbs/355 kg. Despite the mishap on the 800lbs attempt, there is little doubt amongst fans that he will eventually reach those historic numbers.

While Julius Maddox has hit the 635lbs/288kg mark before, it certainly raised eyebrows when fans saw him demolish five-straight reps. With the motivation Maddox is demonstrating, his shot at breaking another world record is definitely on the table in the coming months.

Julius Maddox Putting In The Work While Training

Take a look at Julius Maddox demonstrating irregular strength in the training room when he casually reps 635lbs, five times in about a 15-second timeframe.

While Maddox looked impressive within his training video, his performance on the 800lbs/363kg press left some mystery surrounding the 34-year-old. Prior to his attempt at the 800lbs/363kg lift, he attempted to press 790lbs in training but came up short in the process. After trying to smash the world record at the infamous Wrigley Field, it was reported that Julius Maddox suffered an injury during the mishap.

According to Maddox, he believes the 800lbs bench press is within arm’s reach if he can strengthen his back and perhaps work on his forearms. During the unsuccessful lift, Maddox admitted to his wrists bending and believes that could possibly be a sign of forearm weakness. Julius Maddox dedicates a fair amount of time to keeping fans up to date on his recent activities, though that might work against him sometimes.

In spite of that, Julius Maddox continues his training onslaught. After powering through 5-reps of 635lbs, it’s clear Maddox is positioning himself for some big moves when he’s back in competition. The record holder for raw bench press continues to impress in the training room, undoubtedly fans are chomping at the bit to see him back at it, attempting to rewrite history once again.