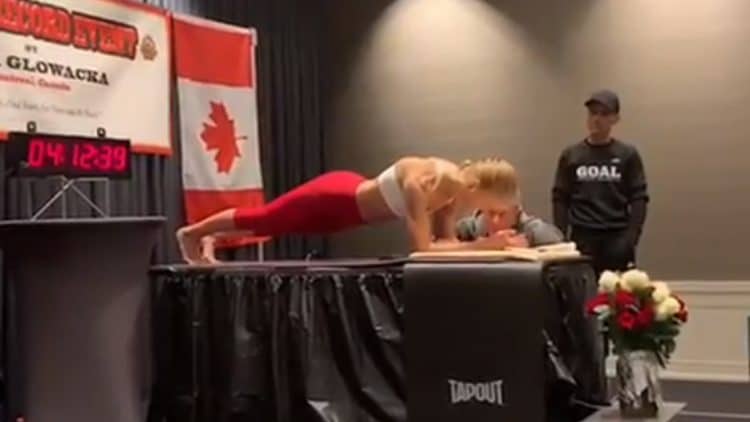 Dana Glowacka is no ordinary gym-goer who has a passion for yoga because the feat that she just accomplished goes way beyond what 99.9% of the population is capable of doing.

She held a plank position for what we’d imagine being a brutal four hours and twenty minutes. But, she did it and in the process set an unofficial world record which should be in the Guinness book, but is not as of yet. She performed the plank at the International Plank Marathon in Naperville, Illinois and this is a new women’s record.

Now, we’d imagine you’d have to be just as mentally strong to hold yourself up for that long but with her yoga experience and level of fitness, it was obviously entirely possible with a lot of practice and good technique.

The previous record was 3 hours and 31 minutes set by Maria Kalimera in 2015, but Glowacka blew it away with her incredible performance.

She documented her preparation with some Instagram posts as well…

Congratulations to Dana Glowacka for her mindblowing feat of strength and endurance as she broke the all-time record (Unofficially) by nearly an hour. And it may be a very long time if we see anyone surpass this number.

George Hood is not your average 62 year old man. This veteran of the United States Marines recently found his...