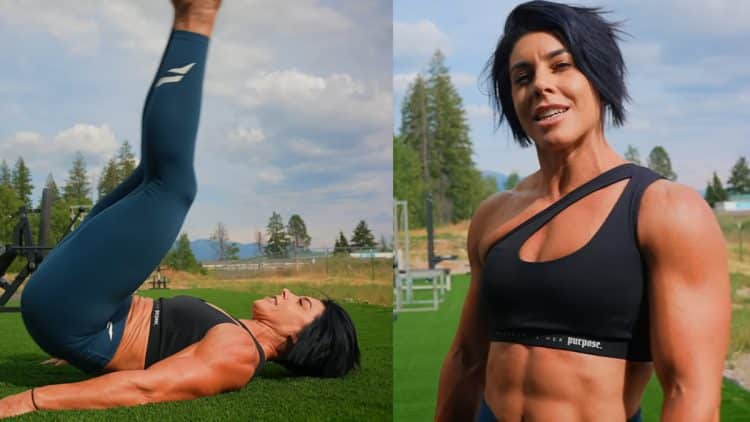 Retired women’s bodybuilder Dana Linn Bailey is a source of workout motivation for millions of people around the world. Bailey is the 2013 Women’s Physique Olympia champion and won the title in its debut year. The 39-year-old bodybuilder continues to train hard in the gym and shares quality bodybuilding content with her 515k YouTube subscribers on a regular basis. Bailey has accumulated vast bodybuilding knowledge over the years through her collaborations with some of the brightest minds in the fitness industry. The former Olympia champion also ran the Warhouse gym with her husband Rob Bailey but had to shut it down due to financial troubles brought on by the global pandemic. While it has not materialized yet, Dana Linn Bailey has hinted at a potential comeback in the past. When it comes to challenging workouts, Bailey is not afraid to take on them. Recently, she led us through a tough abs workout.

A strong core provides stability in athletic endeavors as well as regular day-to-day activities. Therefore, it is of utmost importance to incorporate a core routine in workout plans. Dana Linn Bailey recently took to her YouTube channel and shared a simple but effective core workout that fitness enthusiasts at every level of development can inculcate in their training and transfer the benefits to the other more advanced movements and lifts. So without further delay, let’s see what Bailey advised us to do for a strong core.

Dana Linn Bailey addressed the superficial mindset of many people that work core to have attractive-looking abs and went on to explain the real reasons to strive for a strong core.

She then went on to demonstrate the short core workout that helped her strengthen the core and reap the benefits.

This was the first movement in DLB’s abs workout that targets the lower abdominal muscles.

While it seems a simple movement, halos can be extremely difficult for the beginners that do not have considerable core strength. Dana Linn Bailey performed this exercise for four rounds of one minute. But she advised to start with 15 to 20 seconds initially and slowly work the way up to 1-minute rounds over time.

“If you’re a beginner you can slowly work your way up to a minute,” Bailey advised.

The standard crunch is the most common and basic core exercise out there. However, slight modification in foot placement for this exercise can isolate the abdominal muscles to a far greater extent and improve core strength. Bailey explained that since the feet are resting on the ground in standard crunches, it can engage the hip flexors and deviate the focus from abdominal muscles.

“Anytime you anchor your feet in, you’re going to start adding those hip flexors. If you’re doing abs and all you feel is your hip flexors working… let’s work them on a different day… So instead of anchoring your feet (on the floor) and pulling with your hip flexors, we’re putting our feet together.”

Frog sit-ups are a great variation to eliminate the hip flexors from the picture. To perform:

Once again, Dana Linn Bailey performed four one minute rounds of this exercise and took to the next one.

After doing the first two exercises from the lying position, DLB changed things up and worked from the side plank position for this exercise.

In addition to working the core, threading the needle is an extremely helpful exercise to open the shoulders and activate the back muscles as well.

Bailey next took to this exercise to work the abdominal muscles. While the abs and obliques are primary muscles worked with black widow knee slides, it also activates the glutes, quadriceps and hip flexors.

DLB performed four rounds of 1-minute sets and took to the final exercise of the day.

This was the last exercise in Dana Linn Bailey’s core workout. Russian twists are an effective movement to activate the oblique muscles of the core. Once again, to remove hip flexors from the equation, DLB modified this movement slightly. While traditional Russian twists are performed with elevated legs forming a ‘V’ between the upper body and the legs, she placed her feet on the ground.

“What happens is you are so focused on keeping your legs up – which is good because you’re still working your core. But it’s a lot of hip flexors. So, you’re just going to keep your feet down…” Dana Linn Bailey said.

Dana Linn Bailey is retired from bodybuilding but her passion for the sport has not faded one bit in all these years. The same is visible in her training videos as well as the enthusiasm with which she shares her bodybuilding wisdom. Bailey recently shared what her diet was like when she competed professionally. If she gets back on the training and diet routine of a competitive bodybuilder, she still has a lot left to offer to the sport.