Haney shared his thoughts on Mamdouh “Big Ramy” Elssbiay ahead of 2022 Olympia: "Big has always been a seller. Arnold [Schwarzenegger] proved that in his day." 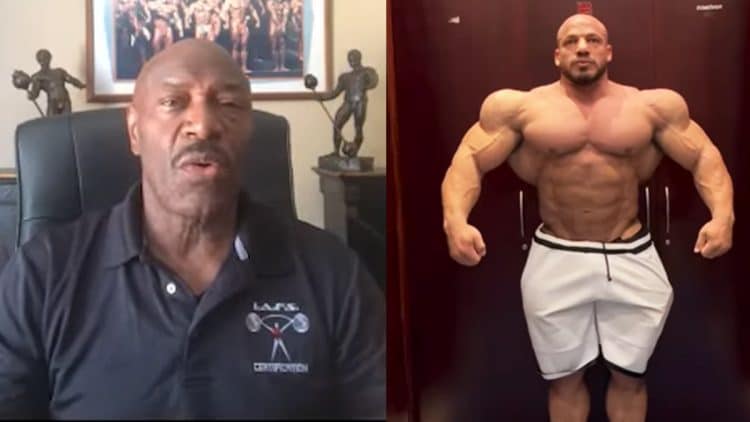 Bodybuilding legend Lee Haney cemented himself as one of the greatest of all time during his respective tenure. In a recent video, Haney compared Mamdouh “Big Ramy” Elssbiay’s Olympia reign to Ronnie Coleman‘s and said the only way to stop him is with aesthetics and ‘pretty’ shape.

“When you’re a champ, they gotta knock his teeth out and cut his head off. If you don’t do that, it’s going to be hard because nobody is going to out-mass Ramy,” Lee Haney shared.

Competing from the late 1970s to the early 1990s, Lee Haney dominated in the IFBB Pro League with a blend of size, muscle separation, and sharp conditioning. He shares the all-time record with eight-time Mr. Olympia Ronnie Coleman for the most Sandow trophies ever earned. Haney was challenged by a number of iconic bodybuilders during his heydays like Shawn Ray, Rich Gaspari, and six-time Olympia winner Dorian Yates.

Given his lengthy Olympia reign, when Lee Haney discusses the sport’s Men’s Open division, the world listens. The last time we heard from Haney, he opened up about some of the heavy hitters who plan on making statements at 2022 Olympia.

Like many other veterans in the sport, Haney sees Big Ramy as an overwhelming favorite. However, he advised last year’s runner-up Brandon Curry to ditch the size game and focus his efforts on bringing more muscle separation. With bodybuilding’s most important contest rapidly approaching, Haney discussed Big Ramy’s progress, and who — if anyone, can stand in the reigning champion’s way of another title defense.

Lee Haney Confident in Big Ramy’s Team, says Only Way to Beat Him is to ‘Out-Pretty’ Him

In a recent video with Muscular Development Magazine, Haney shared his thoughts on Big Ramy’s coaches and predicted that the champion will come in better shape than he was last year.

“I’ve been checking him out on Instagram. And man… he’s got Dennis James working with him now. Listen, when it comes to training and know-how, it’s hard to get better than Dennis. You got Dennis, [Chris] Cormier, Milos [Sarcev] and of course, Charles Glass — it’s hard to get beyond them.

When you got somebody like that working in your corner that’s been there done that information, prepping — you can’t get around that. These are not just coaches. These are seasoned legendary Olympians. When they put a routine to you, put a meal plan to you – it’s right on spot. So, I think Ramy will come in better than he was last year,” says Lee Haney.

The eight-time Mr. Olympia forecasts Ramy peaking better this year and warned his competition not to try to out-mass the champion.

“I feel he’s going to peak as he should. He was a bit off this past year. When you’re on top, ain’t nowhere to go but down. I think it’s going to be tough. If he comes in with that package of super definition, muscle separation, it’s going to be hard to beat him.”

According to Haney, 2019 Mr. Olympia Brandon Curry has the best chance at dethroning the reigning Egyptian champion. He compared Ramy to Coleman after imploring Curry to come into the show ‘sliced and diced.’

“Well, the one that I see that’s got the shape and mass combination, but he’s got a come in there sliced and diced is Brandon Curry. You gotta be sliced and diced,” Haney said. “Ain’t nobody out there that is like that. Ramy is cut from a whole different cloth just like Ronnie [Coleman] was. What you gotta do is out-pretty Ramy,” says Haney.

He added that Bonac is a dark horse too.

“I think Bonac is very good [also]. He’s excellent. He always comes in very good shape. Just a little bit off with his past Olympia. But I think it’s going to be Brandon. If he can come in SLICED, I mean he’s gotta slay Ramy. If you don’t slay Ramy, you just not going to get there.”

When discussing newcomer Andrew Jacked, Haney mentioned that Andrew’s rookie season reminded him of his own.

“That’s what’s so incredible about him coming out there and then just started winning! It so reminds me of when I got started,” says Haney.

“Now, with the new guys, [Andrew] Jacked and Blessing [Awodibu] — if you don’t see them, you have to see them standing on the same stage with a Bonac and Curry and Ramy and Hadi [Choopan]. Hadi brought an incredible package last year. Can he get better? I think he can. He has that combination but he or Brandon, you just gotta slay Ramy.”

Haney believes when it comes to Olympia, the bigger physiques are hard to ignore.

“Big has always been a seller. Arnold [Schwarzenegger] proved that in his day.”

While Haney believes Jacked to be a threat, he said once he fills out properly, he’ll be an even stronger force in the Men’s Open division.

“I’m extremely impressed with the way he looks. He’s got very good lines. He flows very well. I liked his level of muscle maturity also. So, he got all of those things in his favor, which gives him an upper hand. So, if he fills out properly and don’t play too much with this mass game and lose those lines — he’s going to be a force to be reckoned with.”

Haney to Andrew Jacked: ‘Don’t Try to Turn into A Mass Monster’

Capping off the Olympia discussion, Haney gave Andrew a few more pointers before explaining why he, Yates, and Coleman managed to stay on top for so long.

“We stayed on the top for a long time. Me, Ronnie [Coleman], Dorian [Yates] because it’s not every day you see a guy with that height that’s fully developed and have the right proportions and so forth. I mean, if he [Andrew Jacked] can get there, and I think he can — I think he can — will it be this year? Ehh, he’s got a little bit more muscle maturity to do. A little bit more size.”

“Don’t try to turn into a mass monster. Take his time and develop over the course of time and put in muscle exactly where it needs to be. Nice, symmetrical, and proportionate. That wins every time.”

This December, eight-time Mr. Olympias Ronnie Coleman and Lee Haney will be front row to witness the 2022 Mr. Olympia contest. With new talent emerging throughout the season, fans and veterans alike predict this year’s contest to be one of the greatest in the history of the sport.

RELATED: Lee Haney Shares How Hard Bodybuilding Was In His Era: ‘Becoming A Pro Wasn’t A Cake Walk’

Once again, Haney is urging Men’s Open competitors to stop trying to play the size game against Mamdouh “Big Ramy” Elssbiay. He highly favors the champion to defend his title later this year but isn’t dismissing how dangerous Brandon Curry could be.