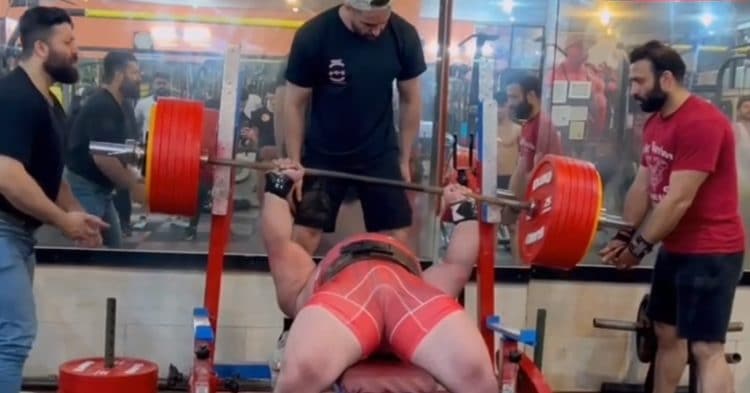 Iranian powerlifter Danial Zamani’s road to 800 lbs is going well, just like he envisioned. Even though everyone knows Danial is the strongest bench presser in the world currently, nobody expected him to progress at this pace. Danial has recently achieved another milestone, which is also a historic accomplishment. Earlier today, Feb. 7, 2022. Zamani hits the heaviest all-time raw bench press ever 360 kg (793 lbs) in training and posted the video on his Instagram account.

In the video, we can see Danial using only a lifting belt and wrist wraps. This lift is 5 kg (11lbs) heavier than the current raw World Record.

The official world record is 355 kilograms (782.6 pounds), set by Julius by Julius Maddox at the Hybrid Showdown III on February 20th, 2021.

It is interesting that one of the strongest people in the world, Larry Wheels, has reposted the video on his own Instagram account with a caption:

“My first target was 360 kg, which is few kg more than the current world record, and my second target is breaking the 800 lbs mark, which I am going to attempt in 20 days. I can not promise to break the 800 lbs record for now due to having pain in my shoulder, but I will try my best and will attempt it definitely. Either I break the 800 lbs number or not, I am going to post the video for all my fans.”

Danial originally announced that he would attempt the 800 lbs bench press after lifting 350 kg (771.6 lbs) just a few weeks ago. He was supposed to attempt 800 lbs in 15 days from the time of the lift, but the plans have changed, and he delayed the lift by 20 days. The reason is probably his shoulder pain, as he didn’t want to make it worse. However, despite the pain, he still pushed through and improved his bench press PR by 10 kg (22 lbs).

Zamani and Maddox were supposed to go head-to-head at C.T. Fetcher’s Iron Wars V, at Iron Addicts Gym in Signal Hill, CA, but the competition was not held for reasons that are currently unknown to us.

However, C.T. Fletcher is so impressed by these two phenomenal athletes and stated in the comments that he wants to invite them in May to compete against each other. If this ends up happening, it will be one of the greatest powerlifting events ever.

“THATS POWER!! INCREDIBLY STRONG! STILL WOULD LOVE TO GET YOU OVER HERE TO GO HEAD TO HEAD WITH JULIUS AT IRON WARS IN MAY, TO SETTLE WHO IS THE BENCH KING!!!!”

Maddox is currently also performing well on the bench press, as he pumped out 10 repetitions of 249 kg (550 lbs).

This was an incredible bench press feat from Danial Zamani, and it will be astounding if he pushes through the 800 lbs milestone. This was not an Official World Record, because it was done in training. Pulling this amount of weight in the training continually proves that his lifts are nothing short of impressive.

Seal Row Exercise Guide: How To, Muscles Worked, and Variations

One of the world’s greatest powerlifters, Russel Orhii, recently traveled to Seoul, South Korea to compete in the 2022 USAPL...