Ronnie Coleman is getting a good pump in during a recent arms workout. 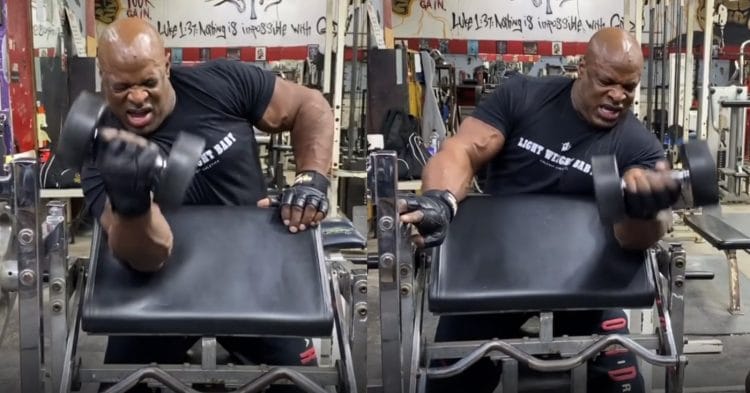 As a winner of the Mr. Olympia title in eight events, many observe Ronnie Coleman to be one of the greatest bodybuilding talents to ever grace the stage. Even in his twilight years, Coleman’s physique looks outstanding in his most recent video shared on social media.

Despite suffering serious back issues from a life of competition, Ronnie Coleman is still determined as ever to sculpt his physique. During his lengthy career, Coleman suffered from herniated discs in his back but never let that stop him from competing. After winning his eighth Mr. Olympia title in 2005, Coleman still relentlessly pursued gold on the highest stage.

The bodybuilding legend competed at the 2006 Mr. Olympia where he managed to secure runner-up at the event. His successor, Jay Cutler, put a halt to Coleman’s long-standing dominance at the time. Returning for the Olympia show in 2007, Coleman placed in fourth. Ever since stepping away from bodybuilding, Coleman remains a notable figure in the sport. His physique often shatters expectations placed on him relating to age.

The credentialed bodybuilder shared a video on his Instagram page of a recent exercise. Working out to “Forever” by Drake, Kanye West, Lil Wayne, and Eminem, the bodybuilder hit some bicep curls and showed off his jacked physique.

“Yeah Buddy, we got those Lightweight Baby t-shirts in Blurry. Sometimes your vision is blurred when lifting those Lightweights Baby!!!! Go to ronniecoleman.net to get yours.” Ronnie Coleman shared.

Ronnie Coleman powered through 19 reps with his right hand and 20 reps with his left. In addition to working out six days a week, the eight-time Mr. Olympia champ accredits his good health to stem-cell treatment. Coleman maintains that he gained nearly 30-pounds after a few of the aforementioned treatments. With more energy to train in the gym, the bodybuilding icon says he bulked up from 255lbs to 285lbs.

Coleman’s activity in the sport was astounding and will be very difficult to replicate. A career in bodybuilding requires discipline and special attention to dieting. The motions a bodybuilder goes through while preparing for a high-profile competition can be intense. As Coleman will soon be reaching the age of sixty, his continued efforts in the gym are motivational.

In the last five years, Coleman divulged that he’s had thirteen surgeries. The bodybuilding legend revealed that even today, he suffers from numbness and weakness. In spite of his struggles, he will always be considered as one of the most dominant bodybuilders to walk the earth. Coleman is tied with Lee Haney for the most Mr. Olympia victories ever recorded in Men’s Open history (8).

Coleman’s longevity is a special accomplishment in the sport of bodybuilding. After seeing Coleman get a good pump in, it appears he’s keen on maintaining a healthy physique even in his retirement days.