Iranian powerlifter Danial Zamani is becoming a serious contender for the world record. 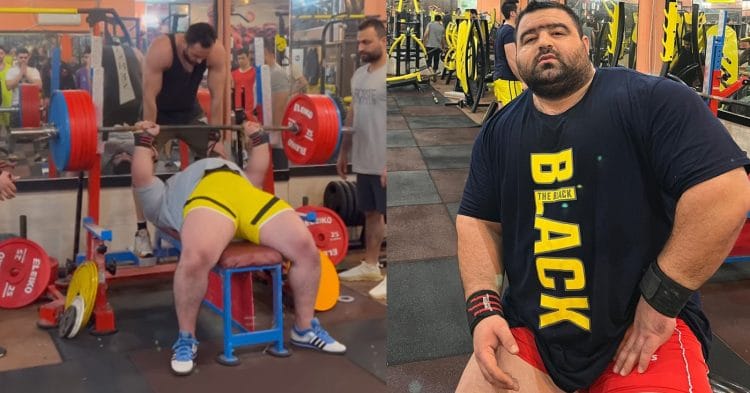 Danial Zamani has shown his prowess in the bench press department over the past year with some amazing lifts in the training session. He upped the ante in the latest video by hitting 315 kg (695 lbs) bench press raw. Danial is without a doubt the only serious challenger in the 800-pounds bench press world record race against Julius Maddox.

You can watch it here:

Related: Julius Maddox Has ‘No Excuses’ For Failed 800lb Bench, But ‘It Hurts Deeply’

Danial Zamani, 30-years old most certainly is a beast in the bench press. He has been lifting staggering heavy weights for some time now, but his 325 kg (716.5 lbs) bench press back in March 2021, really put him in the spotlight. Ever since then, Danial has been making tremendous progress. On August 16th, 2021 strength world took notice, when the strongest bench presser locked out 352.5 kg (777 lbs) in training and expressed his interest in breaking the world record. This lift was just 2.5 kgs shy of matching Julius Maddox’s world record. For reference, Maddox holds the bench press record with a lift of 355 kg (782 lbs).

“I promise in next 6 to 8 months I will push 365 kg bench press. My strong arms and shoulders and good technique helps me bench press with concentration and without any jerk or body movement and will lead to break new records.”

When Will Danial Zamani Compete?

Even though it is not fully confirmed, Danial Zamani could face Julius Maddox at C.T. Fletcher’s Iron Wars. The competition is scheduled for January 24, 2022 , at the Iron Addicts Gym in Signal Hill, CA , but as of now, there is no official confirmation from Zamani. This was announced back in August, through Fletcher’s Instagram account.

It would be fun to see Zamani and Maddox compete directly against each other. They seem to have a friendly relationship between them, as they exchanged a few Instagram comments.

Julius Maddox has already said that Danial Zamani is a serious threat to his world record, and Danial is continuously proving why. The latest bench press of 315 (695 lbs) is some serious weight, and it looked like Danial had a few more repetitions in him. In addition, this rivalry could help Maddox, and we could get the opportunity to see even greater improvements from both athletes.