Daniel Bell Reveals How He Discovered His Ridiculous Strength (EXCLUSIVE) 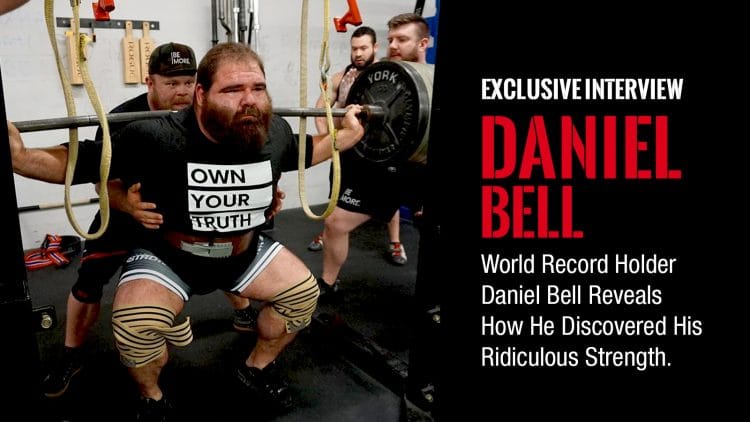 Worlds record holding powerlifter Daniel Bell has had some huge moments so far this year. Now he breaks down what it is that makes him so successful, as well as his diet and training plan and more.

When it comes to powerlifting, few are as naturally powerful as Bell. The man holds world records in several different types of lifting, putting up unbelievable numbers at every turn.  Late last year, he scored the biggest wrapped total in history, extending his own previous record, only to follow that up with another achievement by having the biggest total in knee sleeves. The list of accolades and impressive performances goes on for miles.

Interestingly enough, powerlifting was never originally planned for Daniel Bell. As he explained in an interview with FitnessVolt, he actually started going to the gym to lose weight. However when his friends saw the strength he had on the weights, they suggested he tried to powerlift competitively. From here, it was a nearly instant feeling of enjoyment and community, that has kept him coming back again and again.

“I knew (powerlifting) was a good niche to fall into, just because everyone was so nice and so welcoming. After my first meet, I definetly had that feeling, where it was like ‘this is where I need to be, these are the people I should surround my life with.’ It was a big thing for my entire life, all sides of it. I got to climb to the top of the ladder. I put in six years, and it’s just been such an adventure, and all aspects of my life have just progressed so much.”

Knowing He Found His Calling

From the start of his career, Daniel Bell has been able to lift some insane weight. For someone who had only been trying to lose weight, his brain had to flip a switch to a certain extent, in order to fully dedicate to training. To him, this moment of clarity came right after he was able to hit his first 2200lb total.

“It was in 2015, I believe, and I went and did a meet out in Columbus, Ohio. That was when I was at the top of the 308lb weight class. When I started out powerlifting I was about 285lb, but my bodyweight has gone up since then, which I projected. I knew that for me to get stronger and be at the top, I would need to get a larger frame on me. But yeah, it was right around the first 2200lb total that it clicked in my head that I’ve got a good chance of being the best in the world, not just in the 308 weight class, but in the super heavyweight weight class.”

On the other hand, this was not exactly an easy decision for Bell to make. After all, he had begun his journey hoping to lower his bodyweight, but now he was pumping it up. To him, this was a sacrifice that he knew he had to make.

Things have gone well so far, for Daniel Bell, having secured those multiple world records. Of course, that does not happen for him without a ton of training. Here is how he breaks down his weekly training:

For the most part, Daniel puts a large focus on proper recovery. He has had almost no serious injuries in his career, and he attributes this to how serious he takes his recovery. When it comes to heavy lifting, he likes to space out his heavy training weekly, according to his body’s limits. He says that he rarely lifts light weights, with a competition prep of twelve weeks, truly amping things up about eight weeks out.

As far as diet and nutrition is concerned, Bell currently eats around 3200-3500 calories a day, cranking that up to around 4000 when it comes time to bulk up. He says that he has to keep a close eye on his bodyweight, because when it changes too quickly, he feels sluggish and lethargic.

“My diet’s pretty normal. I’m not a big red meat guy, but I do like chicken,” Bell said. “I just put it on the grill, season it a little bit, put some broccoli and rice with it and I have no problems. So I eat that about five or six times a day.

“I’m pretty big on white rice, because it’s easy to digest and its complex carbs that my body uses for fuel.”

When he is having a cheat day, Daniel’s wife and mother in law cook up some delicious chicken cutlets or chicken parmesan. However this is a once in a while thing, as he keeps things pretty simple most days.

How Daniel Bell Discovered His Strength

When Daniel Bell made the decision to try powerlifting, it was because of his knack for being able to move serious weight. This insane strength was something that seemingly always had, but never realized. He explained that when he was growing up, his football coaches would always tell him how strong he was, he just never understood the true extent of it.

“All through high school, I had all kinds of football coaches tell me, like ‘you’re the strongest kid on the field whether you know it or not.’ I was training for football, so we would do snatch, and stuff like that. We didn’t really deadlift. Actually my first powerlifting meet I bombed out of it because I had no idea how to deadlift. That was when I was like 18 years old, and that was just a locally ran meet, but I didn’t have any idea how to deadlift, so I bombed out. Fast forward nine years, and that was when I did my first sanctioned meet, and I think my best deadlift at that one was 750lb.

“But yeah, (my strength) has been with me for a while, but I’ve always been really athletic my whole life. Like my parents never really pushed me to do any sports, but they always pushed me not to quit.”

Growing up, Daniel says he tried his hand at everything from basketball to soccer, and even snowboarding and ice hockey. However he would spend most of the time playing football, where his natural strength could shine. That being said, all of these backgrounds in athletics were able to confer benefits when he moved to powerlifting.

Dealing With The Challenges Of Staying Motivated

Being successful on the platform does not mean that Daniel Bell has not had any struggles. Yet it seems that his issues are not necessarily related to difficulties with training or competition. Instead he struggles with staying motivated and positive.

“Everybody’s got their down days, and not every day is a great day when you’re training. But if you just keep moving forward, I feel like that mindset will help you in any endeavor. That’s how I’ve always tried to look at it, just keep moving forward and keep going. Today may not be the best day, but you’ve got to go to the next one.”

To keep motivated, Daniel will look at his old competition videos. He uses this to remind himself of how far he has come, which helps him feel better about whatever he is struggling with. This combined with keeping up with the people who are coming up and looking to challenge his records is what keeps him humble and hungry.

What’s Next For Daniel Bell?

In terms of the immediate future, Daniel Bell hopes to compete in September. At The Showdown, he will be competing in sleeves. He hopes to have a quick turnaround here, and compete again before the year is out.

“Right now (I’m looking to compete at) The Showdown, and that one’s in sleeves. That’s the one I want to hit 2500lb in. Then have a short little turnaround eight weeks after that and have another contest at the end of November. I really want to try to get 2550-2600lb, somewhere around there.

“My plan is to take December off and most of January, and then hop into multi-ply again and get my nose to the grindstone, give that some time and work with that.”

It seems like Daniel Bell is highly motivated right now, and looking to do some big things. He is hoping to stay busy, and we are looking forward to seeing it. Be sure to check out the full interview above, and give him a follow on Instagram!

8 Ways to Speed Up Recovery After Training