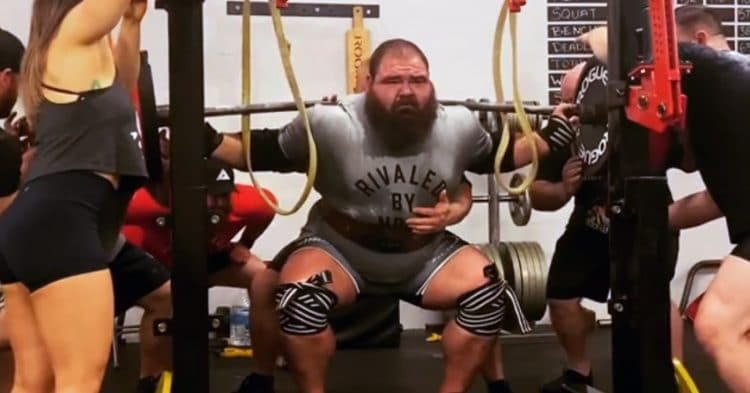 Powerlifting legend Daniel Bell is one of those individuals who are just physically superior in every way. Bell was the all-time world record holder in the raw total w/ wraps with 1142kg/2518lbs; a feat he achieved in 2019. Since then, Petr Petras eclipsed his record in December by totaling 1160kg/2557lbs. But Bell is back and with a vengeance after reclaiming his raw total with wraps crown at the Hybrid Showdown 3 in Miami, Fl on Sunday, February 21 where he totaled 1182.5kg/2606lbs.

He’s known for having out-of-this-world squat numbers and showed that once again by achieving 500kg/1102 lbs in this lift; the same amount of weight that Eddie Hall deadlifted to set the all-time deadlift world record a few years back. He also tied the world record with this lift.

Check out his amazing squat performance from the contest.

His deadlift wasn’t too shabby either although he made it look effortless, to say the least. Bell pulled an earth-shattering 410kg/903 lbs.

This really sealed the deal for his reclaiming the all-time raw total record and it must have felt amazing.

His first lift was 390kg/859lbs and you already know that was smooth as butter. He did get red-lighted in his first 900+ lb attempt for moving his feet but no sweat either way. He’s the king now!

But Daniel Bell was in good company at the event with Julius Maddox improving upon his all-time raw bench press record and inching closer to 800 lbs. Then you have elite lifter Jamal Browner finished with a 1000kg/ 2204.6lbs total; a 10kg increase from his all-time world record total.

Other big names at the event included John Haack and Jon Call (Jujimufu).

All-in-all it was an insane event that saw the world’s absolute best.

Daniel Bell, one of the greatest powerlifters in the sport's history, is back to competing after a difficult year in...

Daniel Bell is one of the strongest powerlifters in the sport. Competing in the 140+ kg category, he owns a...