Mamdouh ‘Big Ramy’ Elssbiay breaks his silence after missing a guest posing appearance at Jim Manion's 2022 Pittsburgh Pro and added that he is unable to travel, 'I can't fly'. 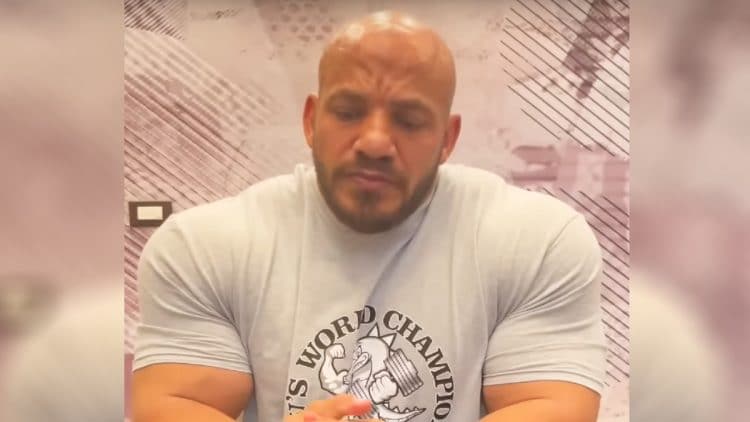 Mamdouh ‘Big Ramy’ Elssbiay has emerged as one of the best Men’s Open bodybuilders in the world over the course of the last few years. In a recent Instagram video, Big Ramy apologizes to IFBB Pro League President Jim Manion and the bodybuilding community for missing a guest posing appearance at the Pittsburgh Pro show.

The 2022 Pittsburgh Pro is regarded as one of the bigger bodybuilding events of the season because of the elite selection of talent featured as guest posers at the show every year. This season was no different, and the event was expected to feature Big Ramy as a headliner alongside a crop of highly talented peers. Prior to the Pittsburgh Pro, Ramy provided a physique update as he continues his quest for a third straight Men’s Open Olympia title.

After the Egyptian native failed to attend the show, 212 Olympia champion Derek Lunsford replaced him, which ended up being one of the biggest storylines following the event’s conclusion. In addition to Lunsford, 2021 Arnold Classic winner Nick Walker, 2019 Mr. Olympia Brandon Curry, and Men’s Open standout Hunter Labrada all stood on stage together guest posing.

In spite of the recent apology given by Big Ramy, many in the bodybuilding community have taken umbrage due to the fact that it took the decorated champion more than two weeks to address the issue. The surprising absence left fans bewildered, as well as one of his own coaches, Dennis James. James spoke about the issue on The Menace bodybuilding podcast and expressed disappointment in Big Ramy for missing the show.

There are a few topics of concern following Big Ramy’s statement. The Men’s Open competitor admitted that he’s currently unable to fly, which has the sporting community wondering if he will be able to follow through with 2022 Mr. Olympia later this year. Ramy is the reigning Mr. Olympia champion and dominated the event for the past two years.

“I know I’ve been absent for a while now and I would like to explain to you all what’s been happening. First, I would like to apologize to Mr. Jim Manion and the IFBB Pro League for not coming to the Pittsburgh Pro. Due to personal reasons that I can’t go into details about, I can’t fly to Pittsburgh. Nothing hurts me more than I know… I missed that event. I let many people down.

Mr. Jim Manion, all of my bodybuilding friends, I’m sorry from the bottom of my heart. I think you all know from day one of starting bodybuilding that I try to do my best and be a good person and a better bodybuilder. Maybe I’ve made some mistakes but I’m human. I know in the future; I will make some mistakes because I’m human. I’m really sorry and I hope you accept my apology please, thank you.” Big Ramy said in a recent video.

While Ramy was unable to provide a reason why he missed the show, he clarified that he was unable to fly. In addition, Big Ramy mentioned that it was due to ‘personal issues’ and looked unhappy and uncomfortable during the video.

Many fans have begun to voice their dissatisfaction with Big Ramy and his role as one of the sport’s ambassadors. He hardly posts on social media, and many believe after winning two Olympia titles, those duties become part of the job description. Despite the cryptic tone of the apology, Big Ramy has finally made an effort to clear the air with Jim Manion and the IFBB Pro League.