Dennis James was disappointed by Big Ramy's absence at the 2022 Pittsburgh Pro, says 'I don't even get a response from the people around him that I talk to'. 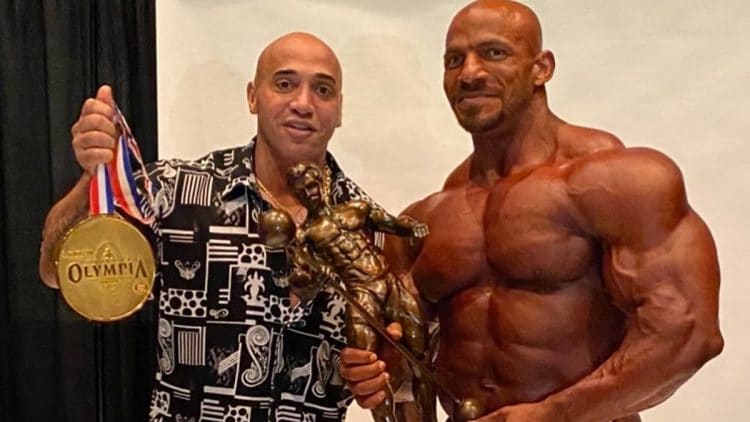 As one of the most dominant champions in the sport, Mamdouh ‘Big Ramy’ Elssbiay commands an audience anytime he graces a bodybuilding stage. After no-showing as a guest poser at the 2022 Pittsburgh Pro, Dennis James was left disappointed and unsure as to why Big Ramy was absent.

Dennis James is a retired IFBB Pro bodybuilder who made the transition into coaching. He came back to the sport for the 2012 Masters Olympia competition. James placed third behind Toney Freeman in second, and 2008 Mr. Olympia Dexter Jackson, who won the show. Despite no longer partaking in active competitions, James is well-respected in the industry, having amassed bodybuilding knowledge that few can rival.

Mamdouh ‘Big Ramy’ Elssbiay established himself as one of the best in the world on the Olympia stage with the help of coach James. He has won Mr. Olympia in the Men’s Open division in 2020 and 2021. In fact, last year Big Ramy stayed at Dennis’ house to finish off preparations for 2021 Mr. Olympia. While the coach and pupil planned to connect before the 2022 Pittsburgh Pro, where Ramy was expected to guest pose, it never came to fruition, leaving Dennis disappointed and uncertain as to what caused the absence.

In a recent roundtable interview, Dennis James gave his thoughts on the Big Ramy situation and why the bodybuilder didn’t show up to pose at the 2022 Pittsburgh Pro.

“Everybody has some stories you know, and I’m going through the internet trying to find out what happened because I don’t even know. I seriously don’t know. I don’t know. I was there to support him because we agreed that I’d come to Pittsburgh to help him out. I was there. He was the one that didn’t show up.”

Listen, all I know is that he’s okay, supposedly. I haven’t spoken to him. I reached out a couple of times, he didn’t respond, and I didn’t hear anything back. I’m still waiting to hear from him to find out what really happened.” Dennis James says.

James made it clear that Big Ramy’s decision not to guest pose at the Pittsburgh Pro was a ‘big mistake’.

“You know what, I was asked maybe 100 times this weekend and I had the same answer. I said, ‘guys I wish I knew, because I would tell you!’ At this point, right, I still don’t know what happened. I still don’t know. All I know, I think that was a big mistake not to show up in Pittsburgh.” James continued.

Big Ramy intended to link up with Dennis James before the Pittsburgh Pro, though Dennis maintains that even when he was on his way to the event, there was still no official word explaining what happened.

“Yeah, I mean yeah. You know, he was supposed to land on Thursday night. I told him, ‘Listen, I’m catching a flight Thursday night, so I’ll arrive later, I’ll arrive Friday morning at 9.’ He was cool. Then, when he didn’t leave for that flight, I was told by someone who books his flights that they changed it to the next day, he will arrive Friday night, and that’s the last I heard. That’s literally the last I heard. I don’t even get a response from the people around him that I talk to. So, it’s… yeah.” Dennis James explained.

According to Dennis James, he’s unsure what the absence really means, and how this will affect Big Ramy’s future plans in the U.S.

“I still hope that he will contact me and fill me in on what happened.” Dennis continued.

Dennis Unsure What Absence Will Mean for Big Ramy’s Career

What bothered Dennis about the whole situation was the fact that Big Ramy didn’t call or attempt to excuse his absence despite being expected to guest pose.

So, we know this is not the case. It had to be something else. I don’t know. I really don’t. I’m disappointed. I’m kind of disappointed, and I’m kind of worried, to the point where I’m like ‘what’s going on’ because I talked to him, two days before he was supposed to leave. I said, ‘listen, make sure everything is good, don’t miss your flight’ because I know he missed a couple of flights here and there by accident.

Like I said, I don’t have any excuses for him. I’m not going to make up any excuses. We will have to see what happens. What comes from him when he’s ready to talk I guess.” Dennis James told the group.

Despite Ramy’s absence, the event’s guest posers stole the show at the Pittsburgh Pro. 2021 Arnold Classic champion Nick Walker joined 212 Olympia winner Derek Lunsford, 2022 Arnold Classic champ Brandon Curry, and rival Hunter Labrada on stage. One of the biggest takeaways was Lunsford’s size, which left many people wondering how he cuts down for the 212 division since he wasn’t dwarfed by any of the Men’s Open competitors.

Many have begun to question Big Ramy as an ambassador for bodybuilding. Unlike up-and-coming competitors like Nick Walker and Blessing Awodibu, who routinely post on social media, Ramy prefers to maintain an aura of mystery and rarely shows off physique updates. Coach James is adamant that Big Ramy no showing the Pittsburgh Pro was a ‘big mistake’ but left the door open for the two-time Mr. Olympia to explain exactly what happened.