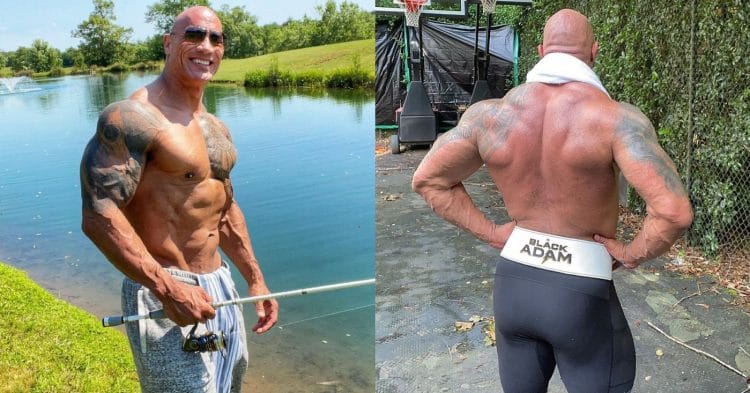 As the filming of DC’s Black Adam movie comes to a close, Dwayne Johnson has been shredding down and getting peeled  He showed the results of this with a recent post that shows off his intimidating physique.

Johnson has made it clear that in the last few weeks of shooting, his titular role of Black Adam will be appearing shirtless, with his physique being on full display. So he has been doing things to prepare for that, including cutting some weight and leaning down to look as peeled as possible.

The results of this work were put on display recently, when The Rock posted a recent pair of updates to Instagram. The first of these saw him posing shirtless while fishing in his home grown pond, where he does indeed look to be in the best shape of his career, as he has advertised.

“Always good to spend time with all my babies,” Johnson wrote.

The look of his physique has many blown away with how incredible that The Rock’s physique is looking. His waist is small in proportion to his upper body, and he looks as lean as he has ever been.

However it is not just the front of his physique that is looking incredible. He also has been working on his back too, and it is looking absolutely enormous as well.

In a subsequent post to his social media, Dwayne gave a look into his backside, which shows his wide back, massive flutes, and huge lats. He also expressed his gratitude to fans for their support during the journey through the filming of Black Adam, while vowing to change the landscape of the DC Extended Universe forever.

“Back to work.
This is our final week of production for the filming of BLACK ADAM⚡️
I can’t thank you guys enough for all your support.
Grateful. Truly,” Johnson wrote.

“Almost two years of hard core, intense training, diet, character prep and execution.
You’ve been right there rockin’ with me all this time 🙏🏾👊🏾
And now it’s my turn and I hope to deliver the definitive antihero you deserve🤞🏾💪🏾
The hierarchy of power in the DC UNIVERSE is about to change.”

With just a week left of filming, Black Adam will soon be entertain the post production phase, where it will still be on track for its July 29th, 2022 release schedule. This movie has been a long time coming, and it will be exciting to see Dwayne Johnson being a superhero for the first time ever.