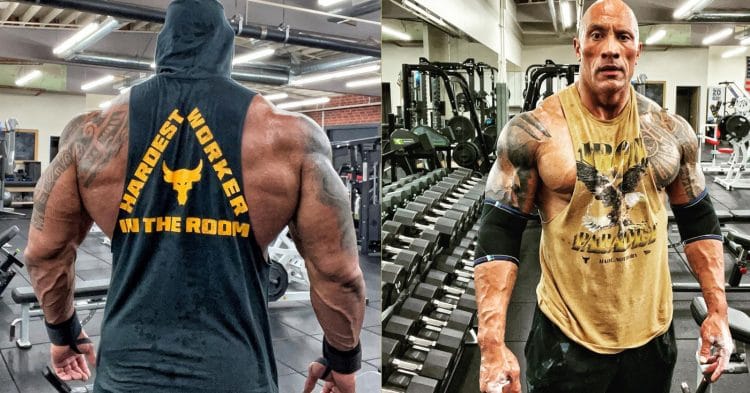 Dwayne “The Rock” Johnson has a reputation to uphold, even if it’s being the baddest mofo in the movies. The Rock is currently filming DC’s Black Adam where he plays the Marvel nemesis and he’s looking every bit the part as he’s updated fans of his physique progress on social media.

He recently posted a back shot in “Iron Paradise” where he looked of another planet while wearing a Project Rock hoodie that read “Hardest Worker In the Room“… and that he is, indeed.

Related: The Rock Reveals His Chest and Tricep Workout To Get Into Superhero Shape For ‘Black Adam’

The 48-year-old movie icon included a quote from legendary singer Johnny Cash that was written on the first page of his Black Adam script of which he shared on an Instagram post a few weeks before filming began.

“I’d love to wear a rainbow every day
And tell the world that everything’s okay
But I’ll try to carry off a little darkness on my back
‘Til things are brighter, I’m the Man In Black”
~ Johnny Cash

Thank you guys for all your support and excitement for this film – we’re motivated to deliver for you.”

The Rock is never shy about letting everyone know he’s the hardest worker out there but that’s also motivated him to inspire others to work just as hard whatever the goal or endeavor.

“Finish your week strong,” he also wrote in the post.

The Rock also shared a front view of the jacked physique he’s been perfecting for the role.

“Into that good night..
Friday night.
1215am and it’s a whole mood in this mf ✔️
Intensely long work week and grateful to release it all on the iron.
I know you know.
#DoNotGoGentle
#bumaye“

Filming for Black Adam was delayed because of Covid-19 but now it’s resumed and is scheduled for theatrical release on July 29, 2022.

We also included the video below where The Rock talks about his show Young Rock and the inspirational backstory behind it.