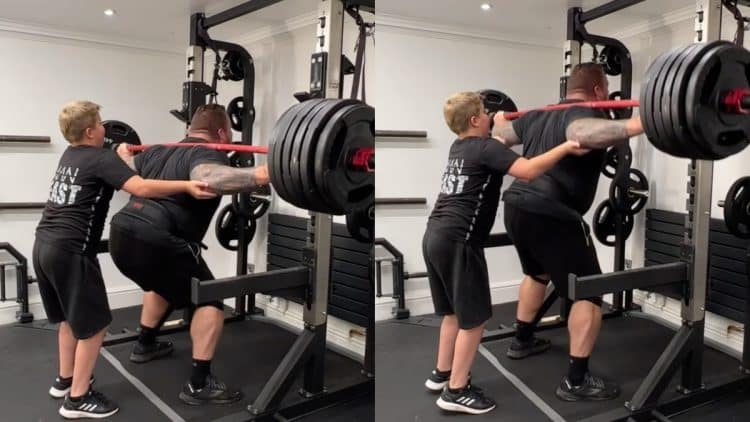 Former Strongman Eddie Hall is widely recognized as one of the most talented all-around athletes based on his accomplishments in different sports. He has racked up some insane lifts over the years and continues to train even after his days of competition are over. In a recent video uploaded on his Instagram, Hall performed a massive 584-pound squat with his son as his spotter.

Eddie Hall is widely regarded as one of the greatest Strongmen in history. Hall was the first person to ever deadlift 1102 pounds (500 kg), a record he held till rival Hafthor Bjornsson broke it by deadlifting 1104 pounds (501 kg).

After stepping away from strongman competitions, Hall brought his heated rivalry with Bjornsson to a boiling point in an exhibition boxing showing billed as “The Heaviest Boxing Match in History.” Both Hall and Bjornsson worked on shedding off the extra pounds in preparation for the enduring bout of six three-minute rounds. Bjornsson handily defeated Hall by unanimous decision on Mar. 19, 2022, in Dubai, United Arab Emirates, which is an impressive feat considering they both had the stamina to go the distance.

Eddie Hall recently got Hafthor Björnsson’s name tattooed on his foot, which sparked speculation about a potential rematch. However, Eddie’s schedule appears to be extremely busy, so it is unlikely that it will take place any time soon. He retired from Strongman in 2017, but now he is returning to take part in a special event.

Hall will serve as the captain of Team UK during the first ever 2022 Giants Live World’s Strongest Nation event. The competition will take place on Nov. 26, 2022, at the M&S Bank Arena in Liverpool, England.

2017 World’s Strongest Man continues to share regular updates on his Instagram account, giving his 3.4 million followers an insight into his daily life.  He likes to train with his son, Max Hall, and recently coached him to his first ever deadlift at the age of 10.   The Hall genes indicate that Max may set a world record in the near future, just as his father did.

In a recent video uploaded on his Instagram account, Eddie Hall can be seen squatting a humongous 584 pounds (265 kilograms) while his son served as his spotter.

Hall performed five reps of the squat in the video. While he got through the first three with ease, he needed a bit of a push to lift the last two. His son, Max, gripped his father’s elbows and gave him the extra push he needed to get the final reps done.

Some might assume that Eddie Hall may have lost some of his strength after losing weight for the boxing match. However, Hall proved the doubters wrong recently by lifting 88.2 pounds (40 kilograms) for an insane 40 reps on the incline press. He only used wrist wraps to perform the set and did not take any breaks between the reps.

In addition to being extremely strong and powerful, Eddie Hall has also improved his endurance. Eddie’s cardio work and boxing training helped him accomplish some impressive things. He is now lifting some heavy weights once again.

How To Do Wall Push-Ups – Muscles Worked, Benefits, and Alternatives