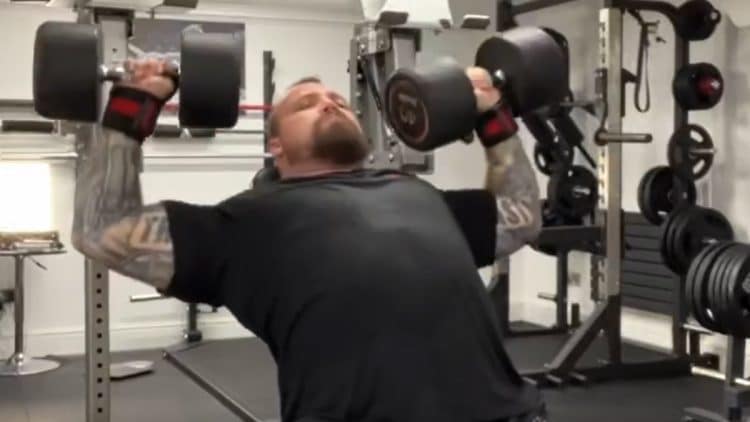 Eddie Hall has built a reputation for having one of the strongest shoulders in the world throughout his Strongman career. However, it would be easy to assume that he has not retained a lot of power after losing significant amounts of bodyweight for his fight against Hafthor Björnsson. As that boxing match is now a thing of the past, Eddie Hall is back to training with weights. He is still one of the strongest men on the planet, which he proved with his recent training session. On May 12, Eddie Hall shared a 40-rep incline dumbbell press with 40 kilograms (88.2 pounds) in each hand.

Eddie Hall completed all 40 repetitions consecutively without taking even a second to rest between them. He only used wrist wraps to ease the pressure on his wrists. The most noticeable detail about his technique is how much Eddie focused on breathing correctly, as he took a big breath on every rep.

Whatever journey I’m on, lifting weights is my therapy and I will always be forever thankful for the gift of the lift 🙏.”

Eddie Hall has always been recognized as a static powerhouse, having claimed the Deadlift & Axle Press World Records at one point. Hall has always been on a different level when it comes to dumbbell presses, as he inclines pressed a staggering 110 kilograms (242 pounds) dumbbells back in 2020.

Eddie Hall recently got a tattoo of Hafthor Björnsson’s name on his foot, which opened the talk about a possible rematch between the two. However, Eddie’s schedule looks jam-packed, so it will probably not happen anytime soon. Eddie Hall retired from Strongman in 2017, but is now returning for a special occasion.

Hall will be the captain of Team UK at the first ever 2022 Giants Live World’s Strongest Nation. The competition is set to take place at the M&S Bank Arena in Liverpool, England, on Nov. 26, 2022.

Robert Oberst has also recently announced that the famous TV show, “The Strongest Man In History”, will be coming back for another season. As we all know, Eddie Hall was one of the four main stars of the show. Eddie has not yet confirmed if he will join the show again.

Eddie Hall is still extremely strong and powerful, but now his endurance is up to par as well. Eddie’s cardio work and previous boxing training enabled him to do some impressive things. But now that he is back to lifting some heavy weights. So the impressive 40-rep incline shoulder press set seems like the start of an incredible journey for Hall.