There's no doubt that the Hall family is known for its deadlift prowess. 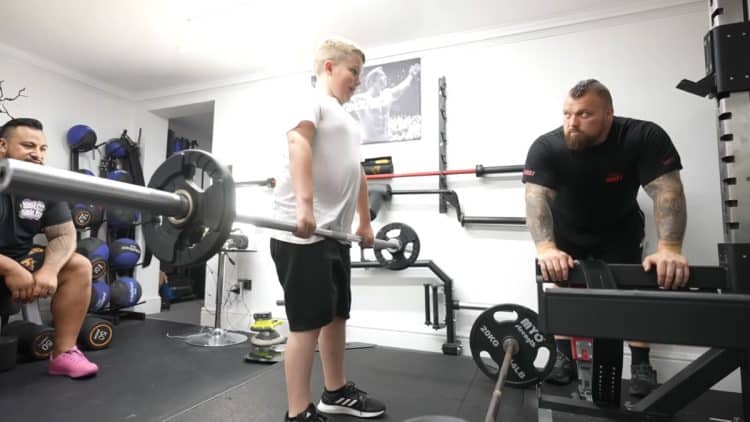 In many sports, we see sons of legends taking up the same hobbies and living up to their father’s legacy, as per the quote: “The apple doesn’t fall far from the three”. Well, a similar fascinating process is starting in the Hall family, as Eddie is delighted to coach his son, Max, through his first gym sessions. He told his father he will join him in the gym when he is 10-years-old. So, after celebrating his tenth birthday a few weeks ago, Eddie took him to the gym. However, after learning the basics in the first few training sessions, the time came for Max to try something new.

Eddie Hall’s most recent YouTube video showed him teaching Max how to perform his first ever deadlift. Eddie and Max Hall also had the pleasure of training with 2x Australia’s Strongest Man and star of America’s Got Talent, Eddie Williams. Williams is still doing Strongman professionally, so Eddie Hall gave him some deadlift tips as well.

Before starting the training session, Eddie Hall brewed up some supplementation drinks for the crew. Eddie Hall then made an elevated deadlift setup for Max to practice grip and other basics. After joking around with each other, Eddie started to demonstrate a perfect deadlift technique.

“I want you to stand shoulder width apart, feet straight like you are on the train tracks… When you grip the bar, I want you to drop it to the floor, and then what you do is drop your hips until your shin touches the bar, then lift up. That’s the perfect deadlift technique.”

Starting from an elevated position, Max Hall did some warm-ups using an empty barbell.

“Move closer to the bar… Don’t move the bar forward or backward, just bend over and grip the bar with straight legs. From there I want you to lean back like you are in the leg press,” said Eddie Hall.

It was Max’s turn once again, and his father added 5-kilogram (11-pound) plates to each side. Max crushed out a few repetitions and deservedly got praise from his father.

“I’m really proud of you for that, because that’s a lot shallower bar (due to smaller weight plates) and it throws the body position off. Well done, awesome job.”

For the next set, Eddie Hall changed the 5-kilogram (11-pound) plates for the 2x heavier 10-kilogram (22-pound) plates. Max received some chalk for his grip, then performed 5 repetitions of the 40 kilograms (88.2 pounds) deadlift.

Max repeated the five-rep set two more times, but added a lifting belt to get accustomed to it.

Max could not have asked for a better coach to train him for the deadlift, since Eddie Hall literally made history as the first man to deadlift 500 kilograms (1,102.3 pounds). Additionally, Eddie also had the distinction of being the 2017 World’s Strongest Man, which speaks for itself.

Hopefully, Max Hall, with the guidance of his father, will someday surpass Eddie’s legacy. Nevertheless, Eddie won’t pressure him, since he just wants to spend quality time with his son.