Eddie Hall proves that he is a man of his word by fulfilling the wager from his boxing match against Hafthor Björnsson. 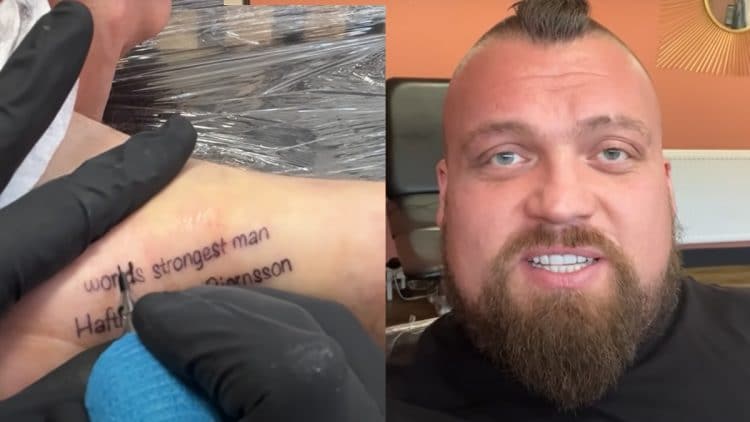 The primary wager for ‘The Heaviest Boxing Match In History’  was that the loser would get a tattoo of the winner’s name somewhere on his body. It was 2017 WSM Eddie Hall who lost the bout to 2018 WSM Hafthor Björnsson by a unanimous decision after six rounds. Everyone has been eagerly waiting for Hall to follow through on the wager. A month has passed since the fight, and Eddie Hall has finally fulfilled his promise by showing off the tattoo dedicated to Bjornsson. On April 20th, Hall posted videos on both his Instagram and YouTube channels, which sees his new ink getting done on the inner sole of his foot. Eddie Hall’s tattoo reads:

Related: Eddie Hall Reacts To His Loss Against Hafthor Bjornsson: ‘Hopefully There Is a Rematch’

In the caption of his Instagram post, Eddie Hall also revealed that he will fulfill his $10,000 wager with Larry Wheels, as well as donate some money to charity, which he promised before the match. It is not clear how much money and to which charity Hall will donate, but there is no doubt that it will be revealed soon. Moreover, Hafthor also said that he would match Hall’s charity donation.

“Being a man of my word🙏. Monies is imminent to charities and Larry! Onto the next chapter in my life.”

Hafthor Björnsson had previously stated that he will discuss the boxing rematch with Eddie Hall if he gets the tattoo of his name + World’s Strongest Man. He could place it anywhere on his body and in any font. After finishing the tattoo, Eddie commented on the possibility of a rematch.

“Could you have had a longer name, Thor? I can see the funny side of this, it is what it is, and this means that down the line the rematch will happen if it is there… But at least this is not as embarrassing as being a sore loser, I can take this as a man and that’s how I see it with this and stay positive,” said Hall.

Björnsson has previously stated that the rematch is a possibility, but also that he doesn’t see it being his next fight.

“Right now again, I don’t think it is the right choice. I think fighting in a year or two is something that can be more exciting,” stated Björnsson.

Related: Hafthor Björnsson Fires Back at Martyn Ford Over ‘Knockout’ Comment: ‘I Think I’ll Smash Him.’

In his recent statement, it is evident that even Eddie Hall considers the rematch with Björnsson to be somewhere “down the line”. It also won’t be anytime soon because Hall will now focus on his return to the sport of Strongman. He will be the captain of Team UK at the inaugural 2022 World’s Strongest Nation, which will take place at the M&S Bank Arena in Liverpool, England, on November 26th, 2022. Team UK will battle Team USA, who will be captained by Robert Oberst.

Robert Oberst has also recently hinted towards the second season of the popular TV show “Strongest Man In History”, and Eddie Hall is expected to be a part of it. So it seems like Hall will be too busy in the near future to properly train for the rematch against Hafthor Björnsson. However, it is a very respectable act that Hall has permanently inked his opponent’s name into his skin, and took the loss like a proper gentleman.