Seeing someone deadlift 1,000+ lbs, and bench press near 800 lbs is beyond what words can express. But the same can be said about some of these very unconventional feats of strength from different eras. 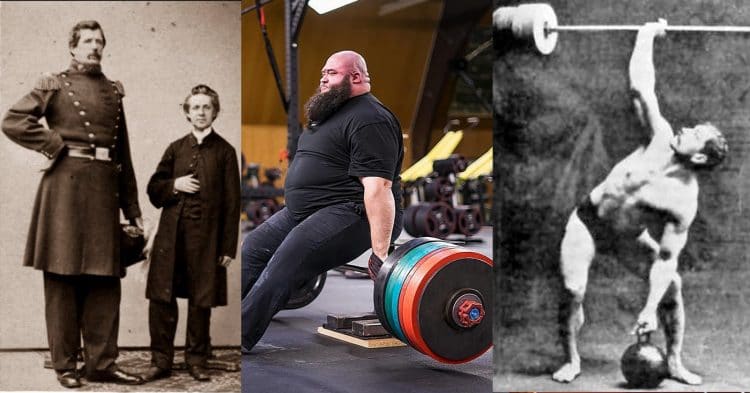 If you haven’t noticed by now, there are some seriously strong and impressive humans (you might be one). Many have been acknowledged for their feats and others hold world records.

And those are just a few of the new strength records achieved this year.

It’s plenty evident that the game is rapidly evolving and changing. But what about some of the more unconventional feats of strength that are never talked about? Many were done way long ago and still hold…

Those are the ones we’re going to talk about in this article. So let’s get right into it…

There are so many different variations of the push-up, that regardless of your experience level, anyone can benefit from this top-notch exercise.

This implies that, like with most things lifting related, there are levels to this thing.

Now you might be saying “16 reps? hah, I bet I could do that”… we’ll bet you can’t as it’s much harder than it looks, even for those with amazing upper body strength!

Not to mention, this is not the most he’s ever done as there’s video proof, and he still performs to this day.

His work ethic is unparalleled and he’s a true beast!

Here’s an epic video of him doing 20 push-ups, although you can see a more recent one on his YouTube channel where he also does 20.

Yeah I know, it sounds like a painful lift or something you’d probably never be interested in trying for yourself (not going to lie, it is a little awkward).

But it’s still a lift and there’s still a record-holder. That man is Arthur Saxon, who currently holds this record; 371 lbs/168kg.

This variation was believed to be what allowed the most weight to be lifted overhead using one arm (also known as one-handed lift); therefore, it was a popular lift back in the day when Strongman legends/icons such as Eugen Sandow, Louis Cyr, and others would include it in their lifting performances.

But nowadays, it’s known as a risky lift due to the position it places the lifter in as the upper body is bent over and rotated.

The bent press is done by cleaning a weight to the shoulders,  bending over to the left, and squatting down until the upper body is parallel to the floor, while keeping the arm positioned overhead.

You’re not actually pressing the weight but lowering the upper body under the weight until the arm is fully extended. The technique uses body leverage to keep the arm in place and the entire body for balance and stability.

The person then stands up erect while still holding the weight overhead.

It can be done with a barbell, dumbbell, or kettlebell.

Now, that was the conventional barbell deadlift and is the most any man has ever pulled off the ground… conventionally.

But it’s certainly not the most weight ever pulled off the ground. No… that accomplishment belongs to Tobias Anthofer, a disabled Strongman athlete, who deadlifted a gravity-defying 555.55kg/1224.78lbs at the 2020 World Strongest Disabled Man (WSDM), in Luenen, Germany.

He beat the previous record of 550kg/1212lbs held by Martin Tye, who beat his own record at the 2020 Arnold Classic Ohio in March.

And it’s crazy that someone was able to come back and beat it. But Tobias Anthofer did by about 12 lbs/5kg.

A basic muscle-up is hard enough, but you imagine doing it with your fingers and not a full-on grip?…

Well, grip master Adam Glass did it and it just doesn’t make sense but you can watch him do it below… like WTF!!?

Most people can’t do a handstand, let alone, do a push-up in this position, let alone… clap in between the handstand push-ups!

If you can avoid breaking your nose, teeth… and face; this one would be a good challenge if you really want to test your strength and athletic talents. Although, we’re certainly not advising anyone to try this.

Frenchman bodybuilder and coach Alexandre Izzi did 21 handstand clap push-ups in 23 seconds. The video says it’s a world record but we’re guessing unofficially. Anyways, apparently, he’s also trying to break the basic handstand push-up record (not much more) too, of which he does 40 in the video below.

Note: The video was posted earlier this year so this was recent.

In the 1981 Guinness Book of World Records, MacAskill was listed as the tallest non-pathological giant in recorded history. He was the tallest man without a growth disorder.

Now, although accounts differ, MacAskill was supposedly challenged by sailors to lift an anchor on the harborside.

This anchor is said to have weighed anywhere from 2,200-2,800 lbs (997kg-1300kg). He was supposedly successful in lifting the anchor to chest height but injured himself dropping it.

There’s no proper documentation of his strength feats, and there were believed to be many others, such as carrying 350lb kegs under each arm and carrying a full-grown horse on his back.

We can’t make any definitive claims but it’s definitely worth mentioning the possible strength feats by this legendary giant.

It’s crazy to think what the human body is capable of and these athletes are a good example of that.

There’ve been many incredible strength feats over the years and there will continue to be for as long as the planet exists.

This year was particularly exciting with all of the new world records but let us not forget about the other achievements, such as the bent press, seated deadlift, 90-degree push-up, and the others on this list!

6 amazing strength feats you probably don’t know about. These performances are very unconventional but still deserved to be talked about.