Eddie Hall Reacts To His Loss Against Hafthor Bjornsson: ‘Hopefully There Is a Rematch’

Eddie Hall says him and Hafthor Bjornsson 'can do business again' 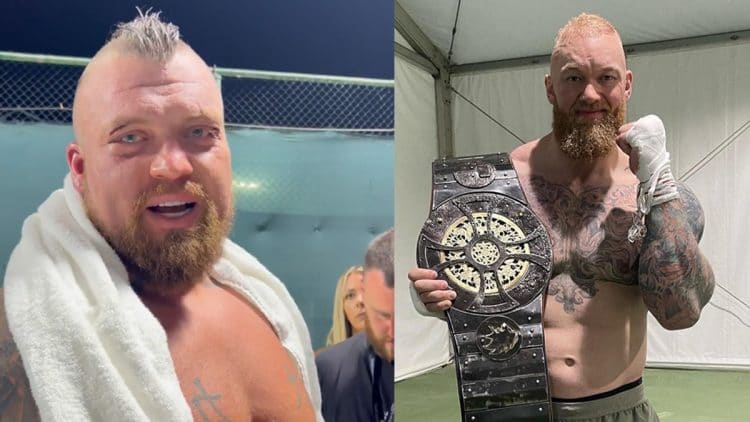 Eddie Hall is hoping to get a rematch with archrival Hafthor Bjornsson after his unanimous decision loss against the latter in the much-anticipated boxing match. Eddie Hall and Bjornsson have been bitter rivals since their days as competitive Strongmen. The rivalry crossed over to the sport of boxing and it was The Mountain that got the last laugh after a grueling six-round battle in the Dubai Duty-Free Tennis Stadium in UAE.

Eddie Hall recently shared a video message on his Instagram account and shared his thoughts on the outcome of the fight. Emotions were running high in the lead-up to the fight due to Hall and Bjornsson’s genuine dislike of each other. However, Eddie Hall acknowledged his loss quite gracefully and showed his willingness to share the boxing ring with Hafthor Bjornsson once again.

“You know what, I can take things like a man. It is what it is. It’s boxing. At the end of the day, I’ve literally fought the biggest man on the planet in a boxing match. I’d like to see anybody else get the balls to do that.”

“It’s been a hell of the journey. I enjoyed it. Hopefully there is a rematch. We can do business again. I just want to wish everyone out there to stay safe, stay positive, keep moving forward in life,” Eddie Hall said.

“Just want to thank everyone for the love and support tonight. It was fun to box literally one of the biggest men on the planet 💪🏻

No excuses at all from me just tonight the better man won. Well done to Thor and hope everyone’s staying safe 🙏🏼

Team Beast,” Eddie Hall wrote in the caption to his post.

Just as Eddie Hall and Hafthor Bjornsson were leaving the ring after the post-fight formalities, iFL TV took immediate reactions from both men. The fight was a high-stakes affair for Hall and Bjornsson. Therefore it was natural for Eddie Hall to be emotional after the loss. While assessing his performance, Eddie Hall said:

Hafthor Bjornsson carried himself with calmness and did not allow the joy of victory to take over his composure. He was a clear winner on the scorecards. However, The Mountain dealt with a fair share of adversity in the fight and had to come back from a vicious knockdown to get a W. While speaking to iFL TV, Hafthor Bjornsson acknowledged Eddie Hall’s punching power and shared his thoughts on how he thought the fight played out.

“It was a hell of a fight in my opinion. I’m going to wait and see what the fans said but in my opinion I thought it was a good fight,” Hafthor Bjornsson said.

Hafthor Bjornsson showed good fight IQ to negate Eddie Hall’s left hook that gave him problems in the beginning of the fight. It was the primary reason for the tide to change in Thor’s favor after suffering an early knockdown. While speaking about the knockdowns and mid-fight adjustments, Hafthor Bjornsson said:

“I got some heavy shots. He hits hard. Let’s be honest.”

“I understood his game plan. That was to take (my guard) down. I needed to keep my left hand up, be careful of his right hook. Once I did that and understood my distance and his game plan, it was my game.”

Hafthor Bjornsson concluded that the heated rivalry is over on his behalf but did not deny the prospects of a potential rematch if Eddie Hall wants it.

Eddie Hall and Hafthor Bjornsson fought a six three-minute round boxing match on March 19th, 2022 in the Dubai Duty-Free Tennis Stadium, UAE. Hall came out strong and landed several damaging shots on Bjornsson in the early going. After suffering two knockdowns in the early going, Hafthor Bjornsson put his reach to good use and fought the majority of the fight behind his long jab and sent Hall crashing to the canvas three times.

Thor cracks Eddie with a nice left hook at the end of Round 3, and the bell comes in clutch. 😳 #ThorVsEddie pic.twitter.com/zq9nB8y6MM

To his credit, Hall showed durability and kept coming back from vicious knockdowns. However, Thor did enough to convince the judges and walked away with a unanimous decision win (57-54, 57-54, 57-54). With a win, he improved his boxing record to 2-0-2.

Crossover boxing matches have received their fair share of criticism due to the perceived lack of competitive relevance in the sport. However, Hall vs Bjornsson did an excellent job to carve a serious and unique space for cross-over fights in the sport. In spite of being relatively inexperienced in boxing, both men displayed all the attributes that a fight fan expects a lifelong fighter to have.

A look at Eddie Hall and Hafthor Bjornsson’s rivalry

Eddie Hall and Hafthor Bjornsson’s rivalry has been an unfinished business since the last five years. Eddie Hall was crowned 2017 World’s Strongest Man and beat Hafthor Bjornsson in the process. However, Thor claimed that Hall had cheated during one of the events at the competition.

In response to this, Eddie Hall released a video on his YouTube channel. Hall accused Hafthor Bjornsson of smearing his win and the referee’s reputation.

Thor became the 2018 WSM but the rivalry remained intact.

The rivalry crossed over to the sport of boxing. Eddie Hall and Hafthor Bjornsson were expected to fight on September 18th, 2021. However, an unfortunate bicep tear forced Hall out of the fight. Bjornsson instead fought arm-wrestling ace Devon Larratt and finished him by a first-round knockout.

Hall resumed training after a successful surgery to repair the torn biceps and the fight was rescheduled for March 19th, 2022.

The build-up to the fight was emotionally charged as the duo exchanged many barbs on social media. The competitive parity and a potential for another explosive fight between the duo is undeniable. Therefore a rematch is not out of the realm of reality.

The Cabbage Soup Diet: Can It Help You Lose Weight?