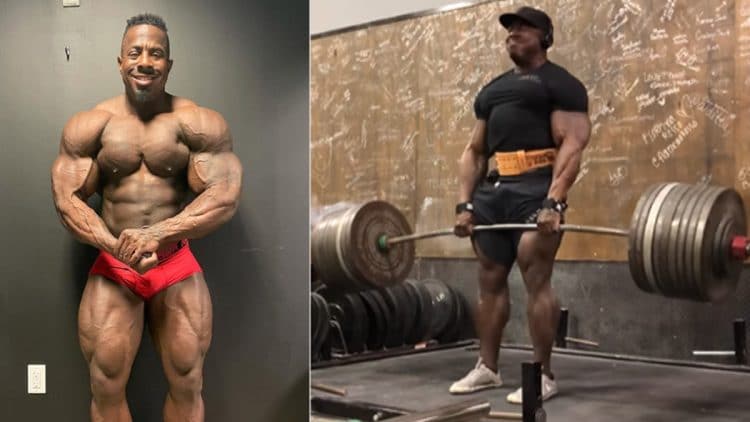 IFBB Pro bodybuilder Joe Mackey recently cranked out a 402.5kg (885lbs) deadlift single in the gym. Mackey is an Open Pro division competitor that last competed at the 2021 Chicago Pro and finished 12th. A few months ago, Mackey acknowledged the fact that he has fallen short of achieving the goals he set for himself. However, becoming the strongest IFBB Pro bodybuilder and winning a pro show are his primary goals for this year and Mckey seems to be heading in the right direction. He has beaten several of his own deadlift PRs and the 402.5kg (885lbs) deadlift is the latest addition to his personal achievements.

Joe Mackey shared the video of his massive deadlift on his personal Instagram account. He used a lifting belt and wrist wraps for the lift. There was a slight lifter’s grind visible while picking the weight off the ground. However, Mackey successfully locked out and returned the bar to the ground with a wide grip. Courtesy of his personal Instagram account, you can watch Joe Mackey complete the 402.5kg (885lbs) deadlift here:

Joe Mackey wrote in the caption to his post.

As revealed in one of his recent Physique updates, Joe Mackey is currently weighing in the 290lbs range. Therefore, the massive lift was three times his body weight. Earlier this week, Joe Mackey revealed his intention to achieve another PR but had not disclosed how much weight he intended to lift. Now that the 402.5kg (885lbs) PR is already in the kitty, Mackey can move on to try and achieve the ultimate goal.

Joe Mackey’s deadlift personal records are a part of the training program formulated by Jailhouse Strong. It is a training service that offers functional and strength training with a workout system devised by prison inmates.

Mackey attempts a higher deadlift record every week and has his eyes set on the 408.2kg (900lbs) deadlift PR that he will attempt in April.

In a recent Instagram post before attempting the 402.5kg (885lbs) PR, Joe Mackey alluded that attempting 453.5kg (1000lbs) PR is not out of the question. However, he will decide if he wants to pursue the goal depending upon how the 408.2kg (900lbs) deadlift PR attempt goes.

Pulling huge weights in bodybuilding is not common, however, this was one hell of a feat from Mackey. Usually, Bodybuilders’ main priority is to focus on building an aesthetic physique, but don’t forget, eight times Mr. Olympia champion, Ronnie Coleman, late Dallas McCarver, Johnnie Jackson, Stan Efferding and Franco Columbu has had lifted monstrous weights during their heydays.

Eddie Hall Reacts To His Loss Against Hafthor Bjornsson: ‘Hopefully There Is a Rematch’