The Strongman legends continue to dig at each other in anticipation of their future boxing matchup. 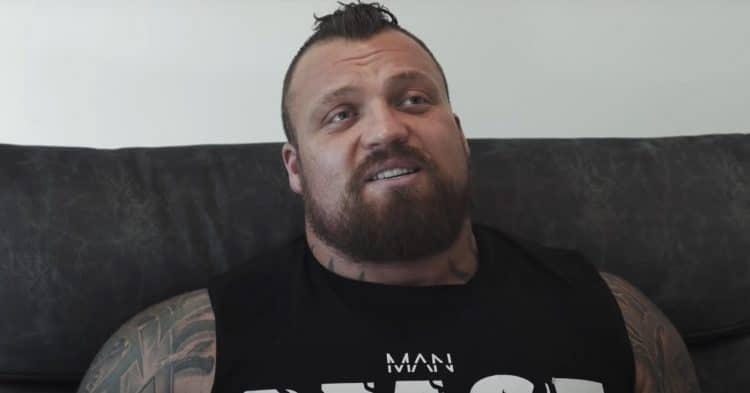 The 2018 World’s Strongest Man, also known as Thor, was supposed to face his foe and 2017 World’s Strongest Man Eddie “The Beast” Hall on September 18, 2021. But after a biceps injury, the latter pulled out of the bout and the arm wrestling legend stepped in on short notice with no prior training.

Hall and Björnsson have been jawing back and forth for over a year since the fight was announced. Well, they’re not about to stop taking jabs at each other (pun intended) until they get a chance to beat each other’s faces in.

In fact, Thor called out Eddie after his Fight Night 3 victory, and “The Beast” has since roasted him but the favor was, of course, returned and we have a lot more of this to look forward to.

But Eddie Hall wasn’t impressed with his nemesis’ performance and a few days ago made a video response to him “beating an old man up with five weeks training,” a comment he left on social media in response to a news post headline.

“The Beast” explained that since detaching his bicep eight weeks ago, he’s already back in the gym training. He also doesn’t feel any less confident that he’d whoop the 6’9″ 300+ giant.

“I would still fight Thor with one arm,” he said.

Hall also expressed that he felt Thor’s first two boxing bouts against Steven Ward and Simon Valilly were a waste of time and that they were told to go easy on him.

“Those two fights for me are pointless,” he said. “Unless you’re in the ring with someone trying to take your head off, there is no experience to be gained there.”

The former all-time deadlift world record holder praised Devon Larratt for stepping in there with Björnsson, although he’s 47 years old to Thor’s 32, and had no training prior experience prior to the bout. Not to mention, the size and strength disadvantage.

Thor has had over a year to train and therefore, also had the clear upper hand in that department.

“Getting into the ring and doing three-minute rounds is hard especially when you haven’t done any prep for it,” Eddie explained.

During the video posted to his YouTube channel, Hall watched the fight and gave a punch-by-punch analysis.

He counted the hits from each fighter and, of course, used that time to criticized Thor, calling his jab and backhand sloppy and predictable. But to be fair, he also commented on Devon’s squared-up and “dangerous” technique.

Overall, he counted nine punches landed for Thor and four or five for Devon in the first and only round.

While he gave Thor the advantage where skills are concerned, he still wasn’t impressed at all with the performance of his future opponent.

“It wasn’t that big a difference let’s be honest. 5 weeks training versus 18 months come on that was nothing to be proud of on Thor’s behalf.”

He again gave a little props to the multiple-time Strongman champion saying he held the center of the ring and was moving but also emphasized his “slobby jab”.

“That sloppy jab, it just won’t wash, that won’t wash with me“. “I think he better rethink his strategy with that because that’s going to cause him a load of problems.”

Hall imagined himself in Devon’s position and saw a lot of opportunities that he feels he would’ve capitalized on.

“My message to Thor, like keep doing what you’re doing mate because it’s absolute dog s–t. I can promise you, in fact, I absolutely believe 100% that I’m going to win our fight when we meet”. “You’re just terrible.”

Hall says the footage he’s put out is just a fraction of what he’s actually been doing and that’s what he wants everyone and Thor to see. Current training consists of sparring three to four times per week and lots of bag work. There are also some spars with decent boxers coming up in the pipeline which will be a good test for him.

What Eddie Hall took from watching the boxing match was that Thor is the worst s–t talker after calling him out following the TKO win, and his confidence is now through the roof.

We can’t wait to watch this spectacle of a fight between the two behemoths. A date for the bout has not been announced, however, Don Idrees, CEO of CoreSports spoke with Strongman Laurence Shahlaei and confirmed that it will happen, possibly in March 2022. But we can’t say for sure at the moment.